Last week, Ernest claimed the chair I consider mine. When I got out, he jumped in. When I wanted to sit down, I had to wrestle him out.  That’s why the photo shows Ernest lying in the chair.

The laptop is in the chair because one night several months ago, when the laptop was sitting on the floor beside the chair, its usual resting place, Ernest chewed through the cable running from the laptop to the fan beneath. The cable was hardwired, so I had to buy a new fan. The next night Ernest chewed through the cable running to the new fan. Fortunately, that cable was replaceable.

Ernest had never shown interest in any of the cables decorating our home, and he’d been peacefully coexisting with the fan cable for two years. I don’t know why he snapped.

I’ve now treated all wires and cables with dishwashing soap.

Anyway, since Ernest’s oral fixation got the best of him, the laptop has spent its nights in the chair, covered by a pillow. William sometimes sleeps on the pillow. On the day I took the photo, Ernest took possession of the chair before the laptop was tucked in.

That’s why Ernest is lying on the laptop.

While we’re on the topic, here’s a picture of the stationary bicycle I bought in January. At Academy. Brand new.

(William, I fear, though he’s neither gnawer nor clawer, may not be entirely innocent in this matter.)

When I discovered the bike’s new look, I wasn’t pleased. I’ve managed to convince myself, however, that function is more important than form. And form can be altered.

I could knit the bike a sweater. And buy Ernest a straightjacket.*

*I can hear readers saying, “What is wrong with this woman? Why does she put up with this?” For three reasons: 1. I love the cats, even Ernest. 2. They’re not generally destructive–don’t tear up carpets, baseboards, cabinet doors, so far haven’t broken any china (although I once came upon William on the verge of pushing the salt shaker off the table, so china isn’t a slam dunk,) and spend most days sleeping and being cute. 3. I don’t want a divorce. 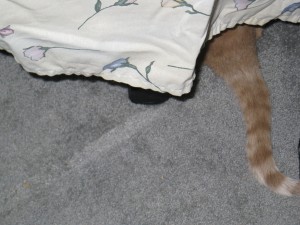 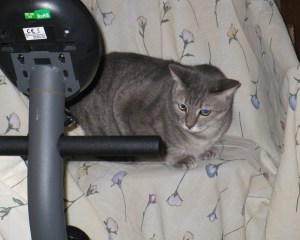 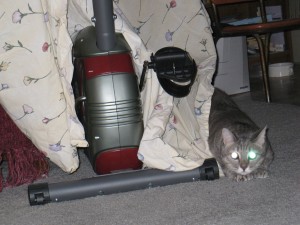