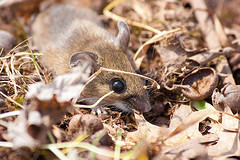 The best-laid schemes o’ mice an’ men
Gang aft agley,
An’ lea’e us nought but grief an’ pain,
For promis’d joy!

I was poised to write a meditation on best-laid schemes going agley, and why Ogden Nash’s verse disappeared from the Valentine’s Day post, when two lines of Burn’s “To a Mouse” caught my eye and insisted on a comment.

Wikipedia, my source for the lines quoted above, displays parallel versions of the poem, Burns’ original on the left and the “standard English translation” on the right.

In stanza one, the poet addresses the mouse whose nest he has plowed  up, saying it needn’t run from him. The original reads thus:

The corresponding lines translated into standard English read this way:

You need not start away so hasty
With argumentative chatter!

That is just sad.

I checked the thesaurus for bickering. Alternatives include quarreling, fussing, quibbling, squabbling, and sassing.

Any one of those, I contend, would be superior to argumentative as an adjective describing chatter.

You need not start away so hasty
With quibbling chatter.

Quibbling’s near alliteration both mirrors that of the original (bickering brattle) and scans better.

I don’t know who came up with argumentative, but the scoundrel had a tin ear.

Now that matters of poetry have been taken care of, I turn to the reason the mouse is here at all–the idea that plans can fall through, and one of mine did, but after the fact.

On Valentine’s Day, I posted a three-line verse by Ogden Nash. Yesterday, for no apparent reason, the little word copyright floated through my head. And then the term fair use, and a question as to when Nash died, and then words such as infringement and cease and desist. And what are the rules about using contemporary poems in their entirety, and what is the status of this blog regarding fair use?

I’ve been hypersensitive about copyright since my library days. I went to conferences and heard stories about a certain mammoth entity that sent cease-and-desist letters to mothers who showed videos at five-year-olds’ birthday parties. The zinger was that if my school district ever received such a letter, it would be addressed to me.

I didn’t want one.

But instead of panicking at my poetic predicament, I decided my best course would be to remove the Nash poem pending the time I clear the cobwebs and get all the issues straight in my head. I used to know copyright for educators. The one thing this blog is not is educational.

I don’t think Ogden Nash would mind my using his little verse. I believe he would pronounce it just dandy that I put him on the web. Furthermore, I doubt his publisher or his estate or anyone else would come after me, my pockets being so shallow they’re almost dried up.

I wouldn’t want anyone using my words without permission either.

So I took the poem off and replaced it with one by Sir Philip Sidney, who has been dead for several hundred years, and about whom there should be no question.

Hurrah for the public domain.

What I really wanted to do, however, was to replace Nash with a verse by Robert Herrick: “To the Virgins, to Make Much of Time.” I love that poem.

Somehow, though, it didn’t seem quite the thing for Valentine’s Day.

The day after Valentine’s, pushed to the brink by those lovely paintings, I cratered. That’s how that happened.

Thirty-two years ago–wow!–I complained to my seniors that when they walked out the door of the classroom, they left literature behind. I said they should take it with them, think about it, talk about it.

I must have been feeling very sorry for myself that day.

Anyway, the girls spoke up and said they did talk about what they’d read. Just the other day, in fact, while they were in the locker room, getting dressed after P.E., they had told the freshman girls about “To the Virgins, to Make Much of Time.”

Gather ye rosebuds while ye may…

“Why,” I said, “did you tell the freshmen about that one?”

The Class of ’79. That’s what my wow was about. That was thirty-two years ago.

Those kids are getting old.

They’re almost as old as I am.

Measured against the deserts of vast eternity, their transgression seems small.