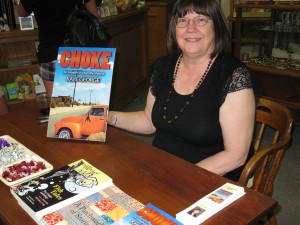 I am pleased—but not surprised—to announce that Kaye George’s CHOKE: An Imogene Duckworthy Mystery has been nominated for an Agatha Award for Best First Novel.

The Agathas, which honor the “traditional mystery” (“loosely defined as mysteries which contain no explicit sex or excessive gore or violence”), are awarded annually at the Malice Domestic convention in Bethesda, Maryland.

A review of Choke appeared here last June. After almost nine months of deliberation, I still agree with what I wrote then. So instead repeating myself, I’ll provide a link.

I will add, however, that although Choke contains no explicit sex, would-be PI Immy Duckworthy wouldn’t mind if it did contain just a bit. She runs across some awfully good-looking guys in the unlicensed private detective business. Both Saltlick, Texas and Wymee Falls have more than their fair share.

Some of them don’t even turn out to be criminals.