Mystery authors Deborah Crombie, Timothy Hallinan, and Minerva Koenig will appear on the panel Get a Clue at the Texas Book Festival on Saturday, October 25, at 1:30 to 2:30 p.m., in Capitol Extension Room E2.014.

Gemma James novels. A SHARE IN DEATH, her first novel,  received Agatha and Macavity nominations for Best First Novel of 1993. She has won two Macavity awards for Best Novel and her books have been nominated for a number of other awards. Her fifth novel, DREAMING OF THE BONES, was named a New York Times Notable Book for 1997, was short-listed by Mystery Writers of America for the 1997 Edgar Award for Best Novel, won the Macavity award for Best Novel, and was voted by the Independent Mystery Booksellers Association as one of the hundred best mysteries of the century. The most recent book in the Kincaid / James series, TO DWELL IN DARKNESS, was published by William Morrow in September 2014.

A native of Dallas, Crombie has lived in both Scotland and England, and visits England, where are novels are set, several times a year.

Deborah Crombie is an American mystery novelist who writes so vividly about England, she might have been born within the sound of Bow Bells. (She) gets better with each book…lyrical, biting and evocative.– Cleveland Plain Dealer 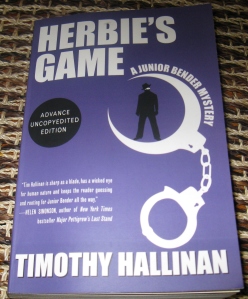 among others, and is currently a Shamus nominee for his book LITTLE ELVISES.  He writes two series, one set in Bangkok, where he lives half-time, and the other in Los Angeles, where he lives the rest of the time. The Bangkok books feature an American travel writer named Poke Rafferty, who has married a Thai woman and adopted a Thai daughter, a street child, right off the sidewalk. The books are as much about family as they are about crime. The seventh Rafferty novel, FOR THE DEAD, comes out November 4, and William Kent Krueger described it as . . .”not only a fast-paced, compelling tale, but also, on every level, a fine literary read.”  His Junior Bender series, about a San Fernando Valley burglar, who works as a private eye for crooks, has just been bought by Iddie Izzard as an NBC television series. The fourth and most recent to be published is HERBIE’S GAME. [Thanks to Timothy Hallinan for writing this copy, which appears here unaltered.]

Minerva Koenig is the author of NINE DAYS, published by Minotaur in September of this year. The main character, Julia

Kalas, is described as “short, round, and pushing forty, but … a damned good criminal. For seventeen years she renovated historic California buildings as a laundry front for her husband’s illegal arms business. Then the Aryan Brotherhood made her a widow, and witness protection shipped her off to the tiny town of Azula, Texas. Also known as the Middle of Nowhere.” With a local law enforcement officer as watchdog.

Julia has no intention of lying low, but she also doesn’t intend to raise her profile so high that half of Texas—good guys, bad guys, and who-knows-what-kind-of-guys—are either chasing, or being chased, by her. One thing is sure–Julia won’t be pushed around by any of them.

Scott Montgomery, crime fiction coordinator at BookPeople Book Store, says, “NINE DAYS introduces us to a fresh-hardboiled voice. Koenig embraces the genre, yet doesn’t completely play by its rules. I can’t wait to see what other conventions she breaks.”

Joy Tipping of the Dallas Morning news hails Julia Kalas as a successor to Sue Grafton’s Kinsey Milhone, saying, “Let us praise the literary gods, then, that a worthy successor has arrived with Austin author Minerva Koenig and her debut novel, the funny, scary and devilishly twisty NINE DAYS.”

A long-time resident of Texas, Minerva is a licensed architect who runs a one-woman practice in Austin. Among her other interests are sewing, playing chess, and fighting the patriarchy.

“Small-town Texas is vividly brought to life in this atmospheric and entertaining debut that also introduces a memorable and unusual protagonist.” ~ Library Journal

Information about Deborah Crombie and Minerva Koenig was drawn from their websites.

I will be moderator of the panel.