The Davises are dieting.

We discovered William’s blood sugar was running high. The veterinarian prescribed an increase in insulin dosage. To pinpoint the cause–he may have become insulin resistant; I may have been giving his injections incorrectly–we need better data.

When his diabetes was diagnosed, we switched to a special brand of catfood but, on the vet’s instructions, didn’t try to limit intake. William ate a reasonable amount and lost a few pounds, and seemed to be doing well.

In human terms, I suppose it’s sort of like going on Weight Watchers. Suddenly and involuntarily. Times two, because Ernest has been grazing right along with his compadre.

And they did not hold their peace.

The guys started out eating the usual breakfast portions and, consequently, were lobbying for dinner before 1:00 p. m. When they would usually have been upstairs sleeping, they milled around the kitchen, parked in the middle of the living room, stared at us with their big sad eyes, and licked their little chops.

One day, William jumped into my lap three separate times. He rarely does that, and although I enjoyed the attention, I knew his motives were not pure. 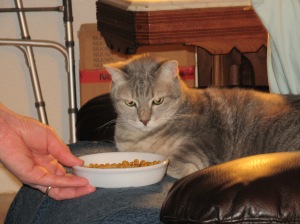 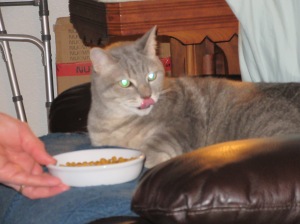 A couple of nights ago I caught David offering Ernest one last chance at calorie-loading. To the uninformed, it seems a kindly gesture. In reality, it’s pure self-preservation: two hungry cats equals eight pointy feet stomping back and forth across us until the clock strikes six.

But things are improving. There’s more napping, less milling, less stomping, less nervous energy in general. We keep tabs on the water intake and watch to make sure William doesn’t become hypoglycemic. In a few days, he’ll go back to the doctor for a glucose test. And the vet will advise us on the next step.

And whatever that is, we’ll trying.

On they page, they may come off as kind of wimpy. But the Davis guys are a couple of pretty tough cats.

Remember Burma Shave signs? I do. They’re the topic of today’s post at Writing Wranglers and Warriors. Come on over and remember with me. Or, if you’re too young to remember, let me educate you. They were a lot of fun.

On March 1, I posted “To March,” a poem by Emily Dickinson, on my personal blog, Telling the Truth, Mainly. I post it every year. There’s no such thing as too much Emily Dickinson.

Then I happened across another poem she wrote about March, and it seemed a shame to keep it to myself, so I prepared to post it on the 2nd.

Like “To March,” the new poem celebrates nature, specifically the natural light that appears in early spring. Unable (after an extensive search of several databases) to find a suitable photograph of Dickinson’s Central Massachusetts in springtime, I settled for a picture of a Texas landscape covered in bluebonnets. . . .

Then I added a few paragraphs about bluebonnets. I wrote about the annual tradition of driving around looking for bluebonnets, the different species, the history of the…

A light exists in spring
Not present on the year
At any other period.
When March is scarcely here

Then, as horizons step,
Or noons report away,
Without the formula of sound,
It passes, and we stay:

A quality of loss
Affecting our content,
As trade had suddenly encroached
Upon a sacrament.

This a picture of Emily Dickinson.

This is a “fabricated” picture of Emily Dickinson.

According to a docent at the Emily Dickinson Museum in Amherst, Massachusetts, in the late 1990s, the photograph was probably altered after Dickinson’s death in 1886, as a tribute and a keepsake. At that time, families often had photographs “enhanced” after a loved one’s death.

I didn’t know Emily Dickinson personally, but judging from what I’ve read and heard about her, I think if she’d seen the enhanced version, she’d have hooted.

She was obviously depressive, but she also had a sense of humor.

The docent told the following story (documented in an LA Times review by Susan Reynolds):

‘Once, when Samuel Bowles, an old family friend and the subject of Dickinson’s Master poems, went to visit, he found himself yelling up the stairs: “Emily, you damned rascal. No more of this nonsense! I’ve traveled all the way from Springfield to see you. Come down at once!”‘

The detail that doesn’t appear in the article, but that the docent added, is that, at Bowles’ summons, Emily left her room and came down the stairs, laughing.

Try calling someone without a sense of humor a “damned rascal” and see what happens.

And she wasn’t quite as antisocial as she’s generally portrayed. Alix North, in a biographical sketch of the poet, writes that in her twenties, Dickinson had a “busy social life” but that by her thirties, she had become reclusive and withdrew when visitors came.

It’s been speculated that Dickinson pulled away from the public because she thought she wasn’t beautiful, or that she was mourning an unrequited love, or that she was agoraphobic. But perhaps Dickinson “became an isolata , creating a moat around herself to preserve the rarity of her soul and because she believed that isolation was critical to artistic expression.”

By the age of 35, Dickinson “had composed more than 1100 concise, powerful lyrics that astutely examine pain, grief, joy, love, nature, and art.”

In other words, she knew exactly what she was doing: Social butterflies rarely, if ever, compose more than 1100 poems by the time they’re 35, at least not concise, powerful ones.

[Sentiments expressed in the preceding paragraph are mine alone. I could be wrong, but I’m not. A 14-year-old boy once told me that anyone who stayed at home as much as Emily Dickinson did couldn’t know enough about life to write anything worthwhile. I refrained from replying that 14-year-old boys don’t know enough about anything to say what Emily Dickinson could or could not do. Now I wish I’d said it. But as I was saying before I interrupted myself . . .]

Edward Dickinson, the poet’s father, was described by contemporaries as “stern and unyielding”; “within his home his decisions and his word were law.” Emily wrote that she didn’t learn to tell time by the clock until she was fifteen because “[m]y father thought he had taught me but I did not understand & I was afraid to say I did not & afraid to ask anyone else lest he should know.”

The museum’s docent pointed out, however, that he was also kind. He could have required Emily to work and support herself or at least to contribute to family finances. Instead, he supported her until his death in 1874. Her sister, Lavinia, took care of most domestic tasks that would normally have been shared. Her family allowed Emily time and space in which to write.

Well, I’ve gone on about Emily Dickinson for a lot longer than I intended, and I hope you’re still with me. I’ll stop now, but not before saying this, which I’ve said before, but I’m going to say again:

A textbook I taught from in 1973, my first year in the Texas secondary school trenches, contained the statement that Emily Dickinson is one of America’s greatest women poets.

And I am unanimous in that.

“A light exists in spring” was taken from a digitized version of Poems: Third Series by Emily Dickinson, edited by Mabel Todd Loomis, 1896, 1898.

Other sources I’ve used include

Put down your Hat —
You must have walked —
How out of Breath you are —
Dear March, Come right up the stairs with me —
I have so much to tell —

I got your Letter, and the Birds —
The Maples never knew that you were coming — till I called
I declare — how Red their Faces grew —
But March, forgive me — and
All those Hills you left for me to Hue —
There was no Purple suitable —
You took it all with you —

Who knocks? That April.
Lock the Door —
I will not be pursued —
He stayed away a Year to call
When I am occupied —
But trifles look so trivial
As soon as you have come