Our first full day at All-Con Dallas 2018 was a rousing success. I sold a book.

A man picked up a copy of DAY OF THE DARK and asked if I had change. I was gobsmacked. Of course I didn’t have change. I hadn’t thought about needing change. I didn’t even have my purse.

David, standing behind me, pulled out his wallet and handed me two fives. I handed them to the customer in exchange for a twenty.

It was fun. I forgot to say, “Would you like me to autograph that for you?” But I’m new at this.

David, as usual, was more prepared than I. He came armed with Tootsie Pops and a bowl he’d bought at Walmart. Two Pops were taken, the first by a monster, and the second by me.

I’d forgotten how much trouble lollipops are. When you have one in your mouth, you can’t talk, and when you take it out of your mouth, you lose the use of one hand. David suggested I set it on a sticky note. Later, when I picked it up, I discovered something interesting: the stickum on the back of the sticky note was stickier than the stickum under the Tootsie Pop.

Most of the attendees were in costume, and we took a lot of pictures. David’s are good; he didn’t mind asking people to stop so he could get a shot. I was reluctant to ask anyone to do anything, so I snapped many of my subjects as they walked toward, by, and away from me. Moving targets, as it were. Fortunately, David shares.

Selling the book was the first Big Deal of the day. 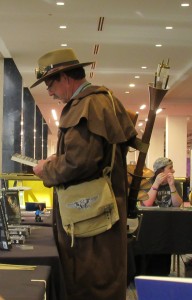 The second also occurred while I was parked at the Aliens and Mysteries table. A man stopped to look at books and stayed to talk about crime fiction, and then about crime, and that led to his saying his grandfather was a Texas Ranger from 1928 into the 1950s. For over a year, I had looked without success for a certain piece of information about the Rangers in the ’50s. So I asked; he told me. I just love serendipity.

The second experience was also serendipitous, but it goes well beyond Big Deal. Tonight I had a sudden inspiration–an epiphany–that could change the course of my life as a writer.

And the credit goes to Lady Lola Lestrange of La Divina Burlesque.

I didn’t get a picture of her. But you can look her up. 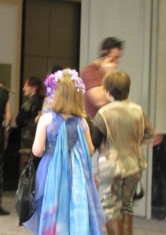 4 thoughts on “Headline: Guess Who Sold a [Copy of a] Book”