“The time has come,” the Walrus said, “to talk of many things.
Of cloture votes— and civil rights— and Martin Luther Kings.”

~ Lewis Carroll, “The Walrus and the Carpenter” 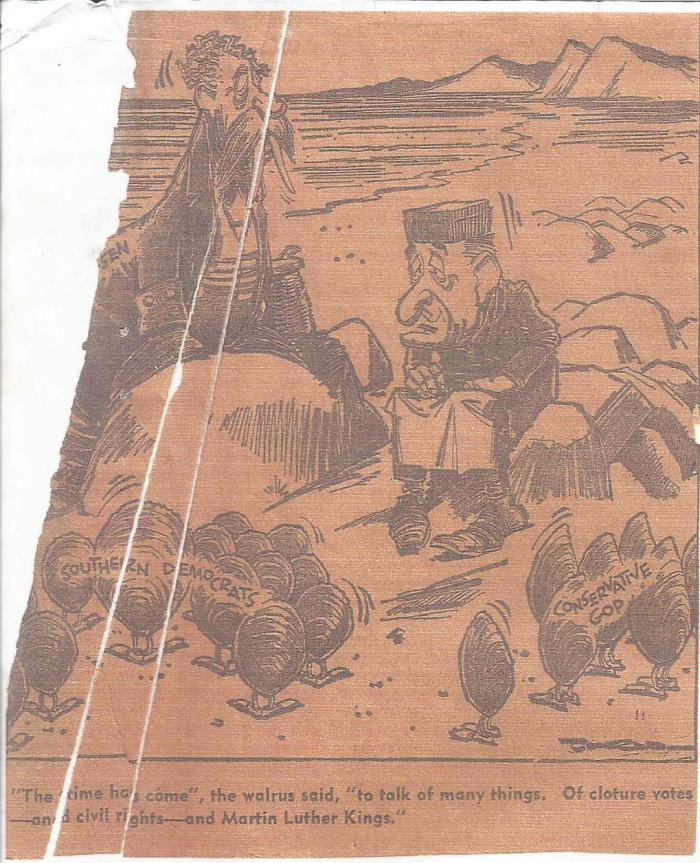 “The Walrus and the Carpenter” was in my seventh-grade literature book. I fell in love with it included it in my poetry notebook, written in ink with a then-newfangled cartridge pen. It took a lot of cartridges to copy it perfectly. I  drew an illustration from the book  on the front cover. I also memorized it.

About a year later, I was delighted to find the political cartoon in a newspaper—the San Antonio Express-News or the Austin American Statesman, whichever was delivering to my house fifty or sixty miles away. I cut it out and pinned it on my wall with pictures of my cow. Today it surfaced.

For those too young to recognize them, the Carpenter represents President Lyndon B. Johnson. The Walrus represents Everett Dirksen, Senate Minority Leader, who helped write the Civil Rights Acts of 1964 and 1968. Both Dirksen and the Walrus had exceedingly curly hair.

Not long after finding the cartoon, I learned that a cousin who visited every summer had memorized the poem, too. For three consecutive years, while waiting for her plane back to Los Angeles to board, we walked up and down the concourse of the San Antonio International Airport reciting “The Walrus and the Carpenter” in unison. We had plenty of time, because Continental was usually two to three hours late. The airport didn’t see much traffic in those days and the concourse was practically empty, so only a few travelers looked at us funny.

Below is a link to a dramatic reading by Roy McCready on Youtube.

It used to be that the world had rested entirely on her father’s shoulders. He was the steady one, the safe one—the person she could depend on when her mother was in a state.

But even the thought of her mother, now, gave her a tugging feeling of loss, and she often found herself missing that shy look her mother used to send from under her eyebrows when she hoped to be forgiven for something, and her lighthearted, girlish laugh, and her floating soprano voice singing, “Write me a letter, send it by mail . . .”

Oh, sounds were what brought the past alive most clearly! “Take my hand,” she heard the back of the room boys crooning, “I’m a strange-looking parasite . . .” And then other, more anonymous voices, blurred and staticky like those ancient radio waves rumored to be traveling endlessly out into space. “One potato, two potato, three potato, four,” and “He-e-re’s Johnny! and “Instinctively, the arthritis sufferer rubs the afflicted area.”

From his bed across the room Peter gave a sudden sharp sigh, and Willa started. It took her a second to remember who he was.

But your voice– never the rushing
Of a river underground,
Not the rising of the wind
In the trees before the rain,
Not the woodcock’s watery call,
Not the note the white-throat utters,
Not the feet of children pushing
Yellow leaves along the gutters
In the blue and bitter fall,
Shall content my musing mind
For the beauty of that sound
That in no new way at all
Ever will be heard again.

But the music of your talk
Never shall the chemistry
Of the secret earth restore.
All your lovely words are spoken.
Once the ivory box is broken,
Beats the golden bird no more.