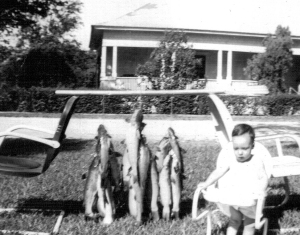 A slow drip leading to a leaking pipe leading to several brittle pipes and serious drips, and finally to a plumber, have brought contractors in to cover holes left in the drywall of the laundry room, and appreciation for a landlord who responds to problems without delay.

With strangers in the house, William is lurking behind the cedar chest. Ernest is folded up on the bottom shelf of an empty bookcase still hidden by boxes and facing the patio window. They don’t enjoy the process. I do.

I grew up calling drywall sheetrock. Well into adulthood when drywall cropped up, I asked what had happened to sheetrock and learned that it’s properly Sheetrock. More properly it’s Sheetrock™, a trade name that’s become a generic term like Kleenex (Kleenex™).

I learned about Sheetrock in early childhood because my grandfather, sometimes assisted by my father, did remodeling and repair around town. Once or twice I got to watch.

Dad was meticulous. Unlike some I’ve seen, seams he taped and floated disappeared, the drywall mud flush with the Sheetrock. Seams in my parents’ living room remained invisible for a good fifty years.

When he painted, the brush moved slowly from side to side, no slopping of paint onto floors, windows, or doorknobs. Stray paint was immediately cleaned up.

During my family’s brief sojourn in Del Rio, we lived across the street from a young man who, post-high school, had briefly lived on the farm with Dad after his parents moved away from Fentress. While visiting, Dad found Dick painting the walls of his kitchen but getting paint on the ceiling, where it didn’t belong. Dad took the brush out of his hand and finished the job himself.*

(My father was almost as particular. He and my mother stopped in to see neighbors who were hanging wallpaper. My dad had to leave because he said they weren’t using enough paste, and the paper was going to fall off almost before they got it up. He couldn’t watch.)**

When Dad was painting Dr. Luckett’s clinic, I dropped by and insisted on helping. He tolerated more from his nine-year-old granddaughter than from adults, and handed me a brush. He knew I wouldn’t last. After about twenty minutes, I stopped to play with a ball of putty, (unsuccessfully) keep my puppy, who had followed me to town, from getting into the paint, and generally get in the way. Not long after that, I went home to air conditioning. My parents had recently elected to move back home from dry Del Rio, and the South-Central Texas humidity was killing me.****

Dad was famous for taking off in the middle of a job to go trotline fishing. Family shook their heads and said, “Well, that’s just Dad.” If people complained, they did it out of our hearing. Many were relatives—extended family lived all over town—and they expected him to disappear for a while.

Or he might have shared his fish. He caught enough to spread some around.

Once in early spring, he did some work for a sister- and brother-in-law who had a peach orchard beside their house. His helper said, “Mr. Frank, I sure wish we were going to be here when those peaches get ripe.” Dad said, “Don’t worry. We will be.”

For years, I thought leaving like that was a character flaw. When I heard that other contractors sometimes take time off in the mid-project, I thought it was a tall tale. People who worked for me finished in a timely fashion. Then a fellow who was repainting the door of a previous apartment—the blazing west sun hit it in summer, so it required paint that wouldn’t peel—told me he did a lot of painting, but he took off and went fishing whenever he wanted, and he didn’t ever apologize for it either. Business as usual, I guess.

The Sheetrock people have gone. They left no sign they’d been here. Dad would be pleased.

*My grandfather had other crotchets, too. My mother claimed that when he was driving down the road and saw a sunflower, he would stop and pull it up. (Farmer.) He let most things go much further than other folks would, but certain things he could not abide.

**As to my father’s other requirements: After retiring, he worked for some farmers he was acquainted with, hauling maize from the field to wherever it went.*** He enjoyed driving, and he liked the men, but after a week or so he resigned. He said they let Johnson grass grow up at the edges of their fields. (Farmer.) He wasn’t obsessive about anything else, but his fields had to be clean, and his fences tight, with sturdy cedar posts and six strands of barbed wire, so his cows couldn’t escape, except for big, fat, sleek Hereford Opal, who lay down and rolled under. Impossible, we thought, but he finally caught her in the act.

***Once upon a time, I knew where maize went, maybe. But I wasn’t a farm girl, and I was busy reading in the air conditioning and didn’t pay attention. I wish had, because now when I set a story in a rural area, I have to look things up.

****After a zillion years, the humidity is still killing me.