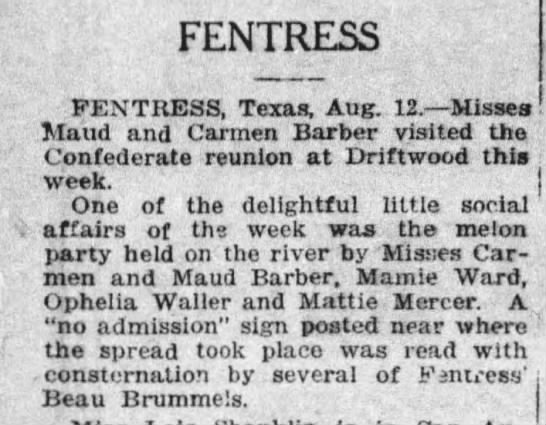 David and I were looking at images of Fentress, Texas—thank you, Google—when he said, “Maud and Carmen Barber.”

“Where?” I said. I get very excited when names I know crop up on the Internet.

In 1922, Fentress was in its heyday, larger and busier than it was when I arrived thirty years later, and its social events were reported in the Austin newspaper.

Here’s a little something extra:

Carmen Barber, who attended the Confederate reunion at Driftwood and co-hosted the melon party, was my father’s first cousin on his mother’s side. Among the the older of his twenty-seven Woodward cousins, she spent her married life, as Mrs. Jack Harper, in nearby Martindale, where she was one of my maternal grandmother’s best friends. When my parents married, she went with them to the Baptist preacher’s house in San Marcos to be a witness.

Ophelia Waller was my father’s first cousin on the Waller side—a total of sixteen cousins there. Married to Tom Ashworth, she lived most of her life in La Feria, Texas. She died there in 2011 at the age of one hundred six. At the time of the party, she would have been seventeen years old.

Mamie Ward (Day) was the daughter of W. F. “Dick” Ward, owner of the town’s ice cream parlor. She taught school in Refugio, Texas. I remember Miss Mamie well from her visits to Fentress during the summers. I contend that her family was the closest thing to royalty Fentress ever had, because of the huge double-dip nickel ice cream cones Dick sold there for close to fifty years. If you dropped yours while getting on your bicycle, he rushed back inside his shop and scooped you up a replacement cone for free.

That’s what I know about three of the girls at the melon party.

What I don’t know—and sincerely wish I did—is the identity of the Beau Brummells who were barred from the delightful little social affair. If I think hard enough, maybe I’ll come up with some possibilities.

One thought on “Fentress Society 1922: Maud and Carmen”