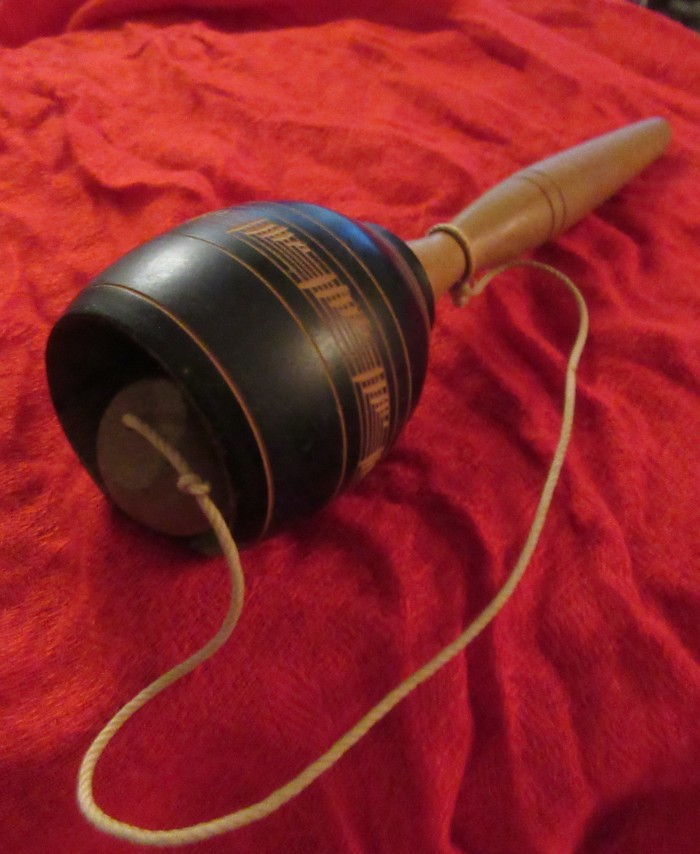 “One of the advantages of being disorganized
is that one is always having surprising discoveries.”

Some of my surprising discoveries during the Great Throwing Away didn’t surprise me, because I knew they were there, waiting to be unearthed. One of those takes me back to the summer I was eight, when my grandmother, Mary Veazey Barrow, spent a month in Del Rio with my family. (To prevent confusion, Veazey was her maiden name.)

For a week—it might have been a weekend, but I like to think it was a week—my oldest cousin, Mary Veazey Worden, came from Houston. Those two women were funny, and with my mother in the mix, everything was hilarious. They were more entertaining than any of my child-friends ever could have been.

We (they) spent much of the week making aprons. I don’t know why. I think the material came from feed sacks. I don’t know where we got it, considering we were living in a city and had no farm animals. I presume my mother had saved it from our years in a minute country town. She’d made me several play suits from chicken feed sacks in a green and white pattern. They were comfortable, attractive, and sturdy, and were probably handed down to some smaller child when I outgrew them. Few things last longer than a feed sack.

The highlight of the month was a day trip across the Rio Grande to Piedras Negras.

My family usually went to Ciudad Acuna, only three miles from home. I loved Acuna, because for seventy-five cents, I could buy a ring. The first time I went there, when I was seven, my parents footed the bill, so I bought maracas and a puppet whose strings I never managed to untangle. They bought me a leather jacket with fringe. The maracas weren’t popular at home because I insisted on shaking them, but I loved the coat. It was soft and warm. I felt quite cowboyish in it.

I despised it, however, the Halloween my mother made me wear it over my princess costume. The night was chilly and probably fell into her category of “I’m cold so you have to bundle up,” but it ruined the effect I wished to project. Clad in a long, glittery dress and scraping along the asphalt in high heels enhanced by fur-covered elastic bands across the toes, I felt elegant and feminine, two qualities that usually eluded me. Wearing the cowboy jacket, I felt like Gabby Hayes in drag. Even a bag of chocolate didn’t console me. After sixty-two years, the disappointment is still palpable.

But back to Piedras Negras. Situated across from Eagle Pass, it was larger than Acuna and offered shoppers more variety.

The shopping didn’t make much of an impression, except that we covered a lot of territory, and that we didn’t have lunch until we got back on U. S. soil. My parents had a thing about not eating in Mexico, even though some of our neighbors ate at Acuna’s Crosby Hotel, and others went to the dentist over there.

But the toy is a happy memory. My grandmother bought one for each of her four younger grandchildren. I don’t think she bought them for the older three, although she might have gotten one for Mary Veazey, because although twenty-something, VZ was nevertheless younger than the rest of us.

Why is the toy memorable? Because for the entire hour’s drive back to Del Rio, Mary Veazey and I sat in the back seat and tried to get the little wooden ball into the little wooden cup. My grandmother (who once amazed the grandchildren by trying out a hula hoop in the living room) took several turns herself.

The feat isn’t easy, and it’s made more difficult by the little wooden piece, which attaches the handle to the cup, sticking up a half-inch in the middle. It’s a wonder we didn’t hit someone, including ourselves, in the head. We shrieked a lot. I’m sure my father’s hearing aid magnified it, but he didn’t complain. He never did.

I tried the toy a few minutes ago. Getting the ball into the cup takes more skill, and luck, than I remembered. It takes considerable force to swing the ball high enough to get the cup under it. I fear my right triceps has deteriorated. Well, I know it has.

About the eating thing. Years ago, David and I spent Christmas Eve in Ciudad Acuna, moving from cafe to cafe, eating tacos—real ones, not Tex-Mex. In the evening, we walked by the Crosby Hotel, which had no vacancies, and saw through the windows the dining room, white tablecloths, small red poinsettias at the center of each table. Beautiful.

The hotel no longer exists. I wish we’d eaten there.

My grandparents, Mary and Marshall Barrow, had four children. My grandfather had been certain that each prospective baby would be a boy, but he ended up instead with four daughters.

One evening shortly before his death in the spring of 1940, he was lying in bed, listening to a radio broadcast of news of war in Europe. He knew the United States would eventually be drawn into the fighting.

Turning to my grandmother, he said, “I’ve lived to see the day when I’m grateful that all my boys are girls.”

*My aunt Barbara found this photograph with my grandmother’s face cut out, so she pasted one in from another photo.