Those who’ll play with cats must expect to be scratched.

It’s the last of the three that’ll get you.

I had just read a brief bio in my memoir class and turned to leave the lectern, when something in my left hip went pop. Not an audible pop, but a pop nonetheless. I limped back to my chair.

With David (poor thing) half carrying me, I staggered across the parking lot, groaning every time my left foot touched the ground. At home, neighbors had the pleasure of hearing me ascend the steps and walk to the door. Yelp, yelp, yelp.

Getting into and out of the car was worse. I couldn’t climb in as usual.

Get into a car like Audrey Hepburn does, my mother said. Sit sideways, then swing both legs in. The Emily post method.

Phooey on Audrey and Emily.

Until hip day. That’s when I learned Audrey had an advantage. She had leather seats she could slide on. I have fabric that grabs your breeches and holds on. Entering and exiting, I didn’t yelp. I shrieked.

The pain wasn’t exactly excruciating, I guess, but it was close.

At home I fell into a chair, texted my massage therapist, whom I hadn’t seen in over a year, and begged for an appointment. That’s how panicky I was. I hate texting.

Anyway, the next day, David hauled me (shriek) to her office. She mashed my spine back into place, then laid her hands lightly around me just below the waist, and said, “How do you sit when you use your laptop? Is it right in front of you?”

This is the way I sit when I use my laptop: 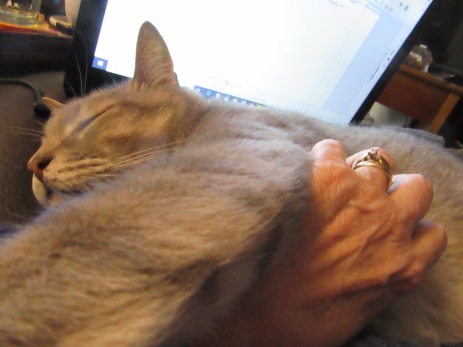 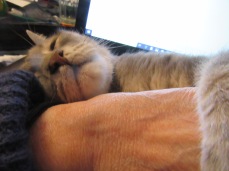 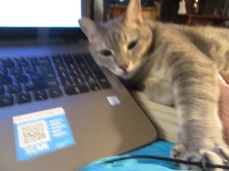 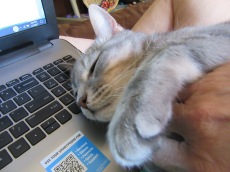 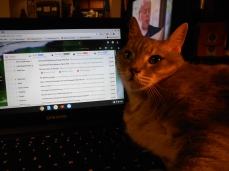 “Uh-huh,” she said, “I can tell you’ve been sitting crooked.”

A girl’s going to do whatever it takes to stop the pain.

But the guilt was excruciating. Ernest has only recently learned to liiiiiiiieeeeeeeeeee downnnnnnnnnnnnnnnnnn, sometimes without being begged, or even ordered, as if it’s his own idea.

He’s the only cat I’ve ever had who followed instructions. Or, more likely, said to himself, She’s been a good and faithful servant. If this is so important to her, I’ll cooperate. I taught him to sit that way. It prevented him from laying his head on the keyboard and typing. (Once he sent an email.) I didn’t realize my hip would suffer.

And he’s a Velcro cat. He can’t help that I have to move the laptop waaaaay over to the left and stretch sideways to reach the keyboard. He needs almost constant physical contact. Denying him my lap could crush his spirit. He’s sensitive.

But for the most part, he’s done well. I gave the I-wuv-oo-oodles-but-we-can’t-go-on-sitting-like-this speech, and he gave up and moved down to lean on my leg.

Mostly. We’ve had wrestling matches. Occasionally I catch him sitting in a straight-backed chair across the room, his lips set in a grim line, staring at me. But over all, we sit in peaceful companionship.

I saw the massage therapist a second time.

My hip has improved.

And the best news is that, with practice, I’ve learned to get into a car like Audrey Hepburn.

Audrey’s legs aren’t visible in this clip, but you can get the drift. She does the swing-around about 1:35. That might not be leather upholstery, but she’s had more practice than I have.