Sometime back in the 1930s, my grandmother picked up the telephone receiver just in time to hear the Methodist minister’s wife, on the party line, drawl, “I am just wo-ahn out. I’ve been waterin’ the yahd.”

To the layman, the statement might not seem funny, but my family has its own criteria for funny.  And so those two sentences entered the vernacular.

They were used under a variety of circumstances: after stretching barbed wire, frying chicken, mowing the lawn, doing nothing in particular.

My father would fold the newspaper, set it on the table, and announce, “I am just wo-ahn out. I’ve been waterin’ the yahd.”

I am wo-ahn out now but not from waterin’ the yahd. 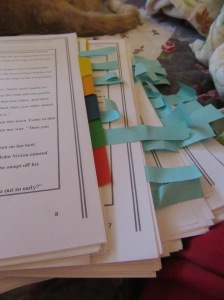 Last night David, the family’s official printer, printed the manuscript of what I’ve been calling my putative book. It runs to over two hundred pages, 51,000 words. It isn’t finished–far from it. There’s more to write, scenes to put in order, clues and red herrings to insert, darlings to kill. All that stuff. And more.

However, for the first time it feels like I can stop calling it putative. No longer supposed, alleged, or hypothetical. It’s looking more like a potential novel. Possible, Even probable,

Now, about being wo-ahn out.

Last night I started putting the manuscript, scene by scene, into a three-ring binder. That required using a three-hole punch.

I hate using three-hole punches. I hate fitting the holes in the paper onto the binder rings. They never fit properly. Getting them on the rings requires effort. It’s tiring.

Then I woke at 5:30 this morning. Instead of turning over and going back to sleep, I got up. I just couldn’t wait to get back to organizing my manuscript.

But I didn’t organize. I managed to drop the whole thing and then couldn’t pick it up. I had to wait for David.

By the time the notebook and manuscript were back in my possession, I was sick and tired of the whole thing. I played Candy Crush.

If I’d had any sense at all, I’d have gone back to bed. I was sleepy. I felt awful. I needed to sleep.

I stayed up added to my sleep deprivation.

I could go to bed right now. I could conk out and tomorrow feel ever so much better.

I am just wo-ahn out. I’ve been waterin’ the yahd.