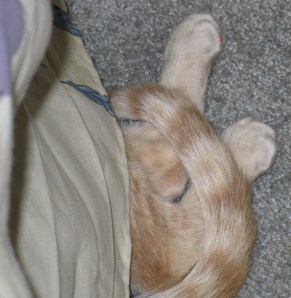 Today’s horoscope said, “A person who means well will throw a wrench into the works.”

That was the man who came to paint the front door. The go-between told me he would be here at 9:00 a.m. I was supposed to secure my cats before he arrived.

Securing cats meant I had to (1) get them into the bedroom and (2) keep them in the bedroom. There’s never a guarantee of either.

The only guarantee was that I would stay with them. They don’t like closed doors. I don’t like being stuck in the bedroom all day.

But I also don’t like my mattress to be shredded.

So I rose early, performed my usual exercise routine (Dear Abby, crossword puzzle, op-ed page, and letters to the editor), and considered the ordeal before me. I wished I had a can of tuna. I could have lured them upstairs with that.

But fate was on my side. Last night, according to vet’s orders, I drizzled olive oil over their midnight snack. They disapproved, so they didn’t eat it, so this morning they were hungry.

I grabbed a clean bowl and their food and climbed the stairs, crinkling the Friskies bag as I went. William and Ernest followed.

I plopped the bowl onto the middle of the bed and poured in a cup of kibble. William and Ernest followed.

I shut us in. William and Ernest leaped from the bed and prostrated themselves before the door. They reached under it with their little paws and stretched their little forelegs as far as they would go.

Knowing that within seconds they’d be using their little claws to bust out of the joint, I harrumphed as if I meant it. They ran under the bed.

I galloped downstairs and grabbed the laptop. I needed to work on my novel. There’s a manuscript contest coming up. I have a lot to do.

By the time the painter arrived at 12:25 p.m. (not his fault), we three had been sharing a cell for nearly four hours. I had canceled my lunch date. Ernest had eaten a few bites. He batted a few more bites onto the bedspread to use as pucks. Normally I would have discouraged this activity; today I saw it as a blessing.

William stayed under the bed sulking. When I lifted the bed skirt, he looked the other way. Even when I opened the blinds, he refused to come out.

I won. He joined William under the bed.

He didn’t know that a third of that harrumph was aimed at the cramp in my back. Lying on my side to type wasn’t smart.

When fumes wafted up the stairs, I slid open the door to the balcony. The cats emerged. They lay side by side, listening to birds and enjoying the illusion of freedom. Then the yardmen turned on the mowers and the painter turned on the sander. William and Ernest scooted back under the bed.

Having scraped, sanded, and applied primer, the painter left at 2:30. I told the cats he was gone. They didn’t respond. By this time I was as stir crazy as they were.  I wanted to crawl under the bed with them.

But I didn’t. I remembered the second part of my horoscope: “The element of unpredictability will be good for you, and so will the delay this causes.”

That sentence wasn’t so easily interpreted. On the one hand, the painter told me  he refinishes furniture. I told him about my oak dining table. He said he could fix it.

Without doubt, that’s good for me. The table top has been teetering on the pedestal since ever since the movers got it off the truck and brought it inside. I’ve been expecting a lapful of lasagna  for the past six months.

On the other hand, there’s the novel. Between cats, fumes, poor posture, and funk, I didn’t get much writing done. In that respect, the delay wasn’t good.

Tomorrow the painter will come back to paint. Friday he’ll come to replace the weather-stripping. That means two more days imprisoned with cats–if they’re dumb enough to cooperate, which is questionable–and two more days of potential writing avoidance.

When it comes to not writing, I prefer to invent my own excuses.

But what’s done is done. The milk has been spilt.

I’ll get up early in the morning. I’ll do whatever has to be done to return the cats to the slammer. I’ll borrow pillows from the guest room to better prop myself up.

But I’ll skip the horoscope. There’s no use borrowing trouble.