“Whenever I find myself growing grim about the mouth; whenever it is a damp, drizzly November in my soul; whenever I find myself involuntarily pausing before coffin warehouses, and bringing up the rear of every funeral I meet; and especially whenever my hypos get such an upper hand of me, that it requires a strong moral principle to prevent me from deliberately stepping into the street, and methodically knocking people’s hats off—then, I account it high time to get to sea as soon as I can. — Herman Melville

When it’s November, I give thanks summer is over and 100-degree weather temporarily behind us.

This November I gave thanks for the veterinarian. 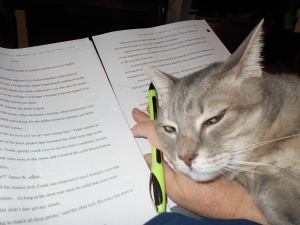 While was in Dallas at a writing conference, David noticed symptoms of diabetes and took Ernest in for confirmation and treatment. I asked how he got the cat into the carrier. “With great difficulty,” he said.

After I returned home, we took him back to the doctor for gastric problems related to his new dietary regimen. The next day, he seemed to be in worse shape, so we took him back. Because he doesn’t like injections any more than he likes the carrier, we hadn’t been able to give him insulin, so that afternoon, before releasing him, the vet gave him a shot.

That night about midnight, in the dark, I stepped on a furry mass beside the bed and turned on the light. Guess who. Ernest. That was a surprise, since he usually sleeps under the bed. When I picked him up, another miracle occurred—he tolerated it. He doesn’t like to be picked up and held either. He  felt like a rag doll. David rubbed honey on his gums, and we headed for the animal ER/hospital (where he went several years ago after eating thread).

By the time we arrived, his blood sugar was 25, so he stayed for an IV and monitoring. At dawn–6:00 a.m., but it felt like dawn—we took him back to our vet for further monitoring. At 5:00 p.m, on the vet’s advice, we delivered him to the hospital for 24 to 36 hours of monitoring. The vet who had given him the insulin was amazed his glucose plummeted like that. The next afternoon, we picked him up.

Over the next two days, I functioned as a lap.

He’s doing well now. We hoped his diabetes could be controlled by diet, but he’s taking injections from David as if they’re no big deal. We watch him for hypoglycemia.

I don’t know whether I could inject him. He and David have always been buds. David is calm, so in David’s sphere, Ernest is calm. I energize him, so he marches around on me and sits on the arm of the chair and pulls on my sleeve. To give him his due, he’s learned to “liiiiiieeeeeeee dowwwwwwwwwwwn” after hearing me plead not too many times. But he has no intention of learning, “Stop pulling on my sleeve.”

On the topic of energy, since retiring, I’ve realized I energized my students, too, more’s the pity. They didn’t need energizing.

Anyway, November, to me, will always be The Month of the Hypoglycemic Cat.

And on a less alarming note, the The Month It Is Cooler, and in 2019, Damp and Drizzly, and Sometimes Even Rainy, Which is Nice.

I shouldn’t say this, lest it embarrass him, but in the hospital, Ernest’s legs were shaved so veins could be accessed, and now he looks like a 1950s lady wearing a fur coat with three-quarter sleeves and gauntlet gloves.

Note the elegant tilt of the head. 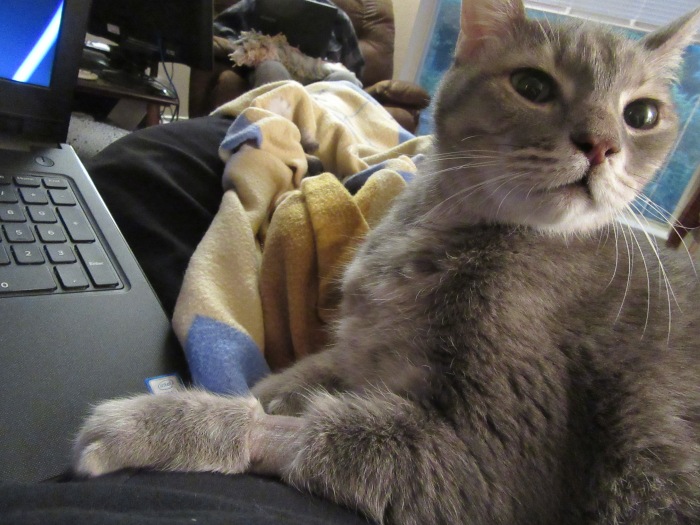