A good day at the Boerne Book and Arts Fest in Boerne, Texas with a group of my Sisters in Crime from the Heart of Texas Chapter 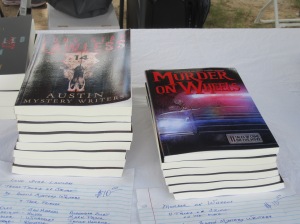 I sold four times as many copies of MURDER ON WHEELS and LONE STAR LAWLESS as I did last spring in Fort Worth–no need to say how many I sold then–but the company of the Sisters  would have made it a good day if I’d sold no books at all.

I surprised myself by un-introverting and not only saying hello to browsers but also telling them MURDER ON WHEELS is better than LONE STAR LAWLESS because I have two stories in MOW and only one in LSL. I also said I like my stories in MOW more than the ones in LSL. The not-my stories in LSL might be better than their counterparts in MOW, but let’s face it, when I’m selling my own books, I get to say what’s what. 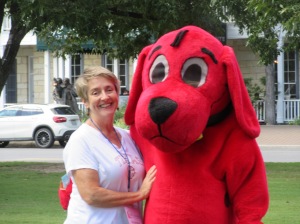 For future reference, anyone contemplating buying one of the anthologies should buy MURDER ON WHEELS, unless he or she already has a copy. In that case, take the other. My story in LONE STAR LAWLESS is excellent, too. I showed it to my high school English teacher and she said so.

In other news, at The Bosslight in Nacogdoches a couple of weeks ago, I bought a copy of Book Riot’s READ HARDER. Failing to examine it carefully, I thought it was for keeping a record of books read. Imagine my surprise when I later discovered it’s a series of twelve reading challenges. Among them are

-a book about book

-a book about a current social or political issue

-a book about space

-a book published by an independent press

-a book that was originally published in another language

So I must make decisions.

I’m tempted to re-read some books–for a book originally published in another language, for example, I’d like to re-read Giants in the Earth, originally published in 1926, which I read in 1975. Written in Norwegian, it was then translated into English by author Ole Rolvaag. It’s the story of Per Hansa, who in 1873 settles with his family in the Dakota Territory. A look at Wikipedia to check my facts reminds me that Giants is the first book in a trilogy, so I’m free to read the sequels, Peder Victorious (Peder Seier) (1928) and Their Fathers’ God (Den signede dag) (1931).

For an award-winning YA book, I’d like to re-read Katherine Paterson‘s Newbery winner Jacob Have I Loved. Although the Newbery

is given for children’s books, Jacob is really for older readers, and, I contend, for adults.* As a person of integrity, though, I’ll read a book that’s new to me. Then I’ll read Jacob again.

Note: All of Paterson’s book are exquisite. She believes that once children reach a certain age, they should not be given fairy tale happily-ever-after endings. Her books carry the message that life can be difficult–as it will be–but that readers have the knowledge, courage, and strength to endure, and that there is always hope. The daughter of missionaries to China, herself a missionary to Japan for a year, and the wife of a Presbyterian minister, Paterson writes realistic–and drop-dead funny–books that hold a prominent place among titles

most often banned in the United States: Sometimes, when pushed to their limits, her characters say, Damn. They also have problems, have to make hard choices, and are not happy all the time, conditions some adults have forgotten from their own childhoods. Young readers, however, love her stories.

For a book about books, I’ll read The Madwoman in the Attic: The Woman Writer and the Nineteenth-Century Literary Imagination by Sandra Gilbert and Susan Gubar (1979). It examines Victorian literature–specifically, the works of Jane Austen, Mary Shelley, Charlotte and Emily Brontë, George Eliot, Elizabeth Barrett Browning, Christina Rossetti and Emily Dickinson–from a feminist 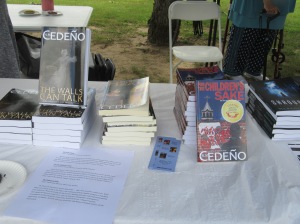 I read part of Madwoman years for a graduate course and found it fascinating. According to Wikipedia, some critics say it’s outdated, but that won’t keep me from being fascinated again. A second edition was released in 2000.

I’ll check the Internet and journals for the subjects of other challenges. The only book I’ll have trouble choosing is one I “would normally consider a guilty pleasure.”

*The best children’s and YA books are for grown-ups, too. Adults who don’t read pictures books don’t know what they’re missing. A good book is a good book.

Here’s a grandmother reading The Wonky Donkey to her grandchild. Or trying to read it. Pay no attention to background noise.

The man standing beside the SINC Heart of Texas banner is author Nichols Grimes, who kindly let us take his picture.

What was I thinking? Obviously not much.

For a previous WordPress photo challenge (Object), I posted

I don’t know why. I’d already picked out several shots I liked better, such as

either of which is more interesting than books on chairs.

But at the last minute the books jumped out and said, Pick me! So I did. I was later appalled at how foolish the photo looked in comparison to those other bloggers posted.

On the other hand, considered as geometric shapes–two right triangles formed from a rectangle, their common hypotenuse composed of mysteries–the picture assumes a significance bordering on the semi-artistic.

Had I cropped more precisely, or had I posted before midnight, I might have observed that before now. But probably not.

You see, I didn’t discover the books formed a hypotenuse by studying the photograph. I saw it while composing this post. I wrote the word diagonal to describe the line of books, and suddenly saw triangles.

In other words, I didn’t know what I knew until I’d written it.

It sounds backward, especially to people who’ve been told they must outline before they write. Which is practically everyone who passed through an English class before the process theory taught by Donald Murray, Ken Macrorie, Peter Elbow, and other teachers was widely recognized. Writing as process allows students to use language to discover what they know and think before they try to organize.

(Ironically, most of those early outliners could have told their teachers that outlining with an empty head doesn’t work.)

When Gertrude Stein says writers have the daily miracle, this must be what she means: allowing language to lead, using the hand to stimulate the mind, being surprised by your own creation, discovering yourself through words you’ve written.

Thinking with a pen, or a keyboard, in hand works for anyone willing to put words on paper or pixels on a monitor.

Stephen King starts writing and ends up with The Shining.

I start writing and end up seeing triangles.

On this day, triangles are miracle enough.

I was about 500 words into a post about Kaye George’s new novel, Choke: An Imogene Duckworthy Mystery, when, upon clicking Save Draft, I received an error message I’d never seen before.

Then I discovered I was logged into HOTSHOTS!, the local Sisters in Crime chapter’s newsletter, and was, in effect, about to post on the wrong blog. The Sisters probably wouldn’t have approved.

Guess what. It wasn’t there. Sometimes To write is not to write.

I then logged into To write, etc., and rummaged around to see whether the vanished draft had somehow landed here. Stranger things have happened. But not this time.

So. I shall behave with my usual grace under pressure. I shan’t say mean things about anyone. Or anything. Or lament the loss of that most excellent essay.

I shall instead close up shop and go to bed.

If, tomorrow, I can bring myself to start again, I shall, but with the knowledge that any attempt to match the quality of the original is futile.

That piece was dead brilliant.

1. Writing: Sunday night I received chapter 1 of a 4-part mystery that’s being written by members of the local Sisters in Crime chapter. My job was to write chapter 2. That’s what I did all week–wrote, revised, tweaked just over 1000 words’ worth of mystery.  I had a wonderful time, no “writer’s block,” no worries, no cares, just took the situation that had been set up and had fun putting my spin on it.

Isn’t that always the way. If I’d been working on my novel, I’d have spent the week moaning and groaning and suffering over what to do next. In this assignment, I was free to do whatever I wanted (with the knowledge that someone else would have to pick up where I left off, poor thing), and I did it. The mystery will be read to honor (aka roast) a member of the organization. My fun may come back to bite me: I inserted the phrase Barker Black Blenheim Boots, but I have to read my chapter aloud, and I can’t always say that phrase without tripping over my tongue. Too many B’s.

2. Exercise: On Thursday, I exercised in the pool for 11 minutes. I had spent the previous 19 minutes inching into the water. Burned at least 2000 calories just shivering.

3. Sleep: Still a mixed bag. It’s now 11:09, and I would be happy to keep on writing until dawn. A repeat of last night’s Lark Rise to Candleford is on, and at midnight MI5 will begin. It’s a repeat of a repeat. Of a repeat. But well worth keeping an eye on while I write a second post.

On the other hand, if I post and link and then retire, I’ll be in shape to work on Molly tomorrow.

It would be pleasant to have a few hundred Molly words to report on Wednesday.

To see what other AROW80 writers are doing, click here.