I woke late this morning (really one morning a couple of weeks ago) and looked out to see a dog dancing around on some white stuff. It took a moment to realize the white stuff was snow. I dressed, took my camera, and headed out to document the event.

The first time I saw snow I was five years old. Dr. Luckett was at the house to see my mother, who’d come down with the flu. My father asked if he could wrap me up and take me outside, but the doctor said no, it wouldn’t be a good idea. I spent most of October through April with a chronic sinus infection, tonsillitis, and a raging fever, and going out into the cold might start things up again.

I haven’t seen much snow since. In 1985, I believe it was, fifty miles south of Austin, we ended up with about twelve inches of snow packed and iced over. I felt so sorry for the cardinals swooping down and finding nothing to eat that I threw an entire box of Bran Buds across the ice. Tramp, my terrier, walked around licking up the cereal while I called to him to stop that. His Sweet Babboo, the neighbors’ pit bull, Becky, stood beside me on the porch, wishing she could lick the yard, too. When you told Becky not to do something, she obeyed, mostly. Tramp did pretty much as he pleased.

In 2000, David and I spent Christmas in Maryland, and I learned what it felt like to walk through the woods, kicking my way through white powder. It was beautiful.

It was still snowing when I got outside that morning but the white stuff was quickly turning to slush, and before I could get back inside, what had started as flakes sifting onto my hair turned into wet plops.

But here is one little event of Austin in January 2021. 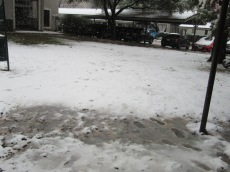 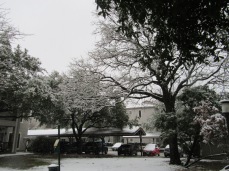 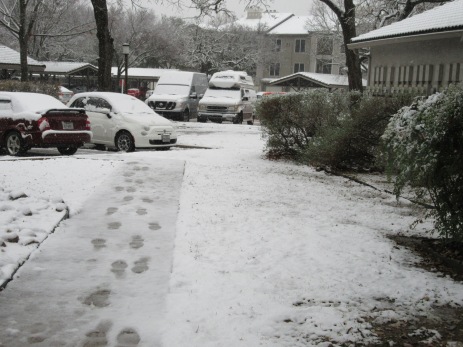 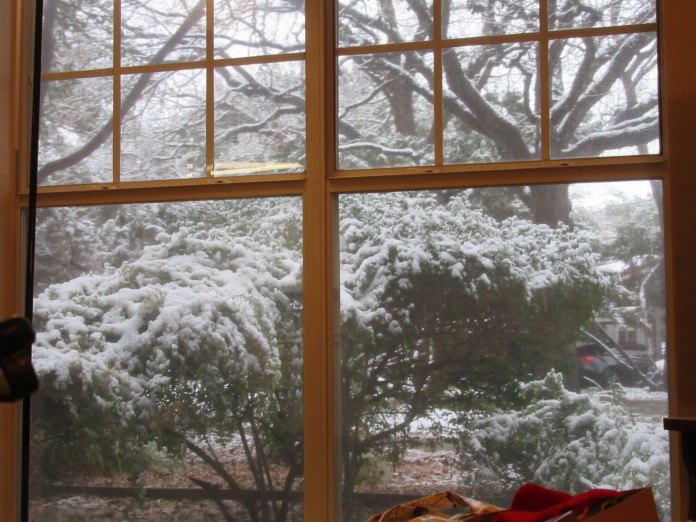 A good ice storm is prettier than snow, much more impressive, but I don’t think I’ve seen one of those since the ’70s when I had four impacted wisdom teeth removed, and I could have done without it then.

A day for staying indoors and choosing a new theme for your Google homepage.

If you can stay awake.

I’m fortunate. I don’t have to travel. JFTHOI Writers meet tomorrow–or meets tomorrow–but attendance isn’t compulsory. When roads are icy, few things are compulsory. I fell off one highway once because of a patch of ice, and I don’t care to repeat the experience.

If my husband has to leave for work at the usual time, I’ll worry. But when roads are bad, his office generally delays opening.