Back in my teaching days, I handed a student a copy of T. H. White’s The Once and Future King and told her I thought she might like it. She did. So much, in fact, that she volunteered to write a review for the school newspaper.

The review went something like this: I loved this book. It was just so…Guinevere was terrible. She was just so… It was so sad…It’s a wonderful book. I just love it.

Unfortunately, the review was never published, because instead of turning into ideas and thence into sentences and finding its way onto paper, it remained a clump of molecules of emotion lodged somewhere in the vicinity of the student’s corpus callosum. Only a few tiny bits escaped as babble.

The reason was no mystery: The writer was too close to her subject. She lacked distance, detachment. She needed, as Wordsworth said when defining poetry, to recollect her powerful emotion in tranquility.

Lack of detachment is a common condition. I’ve suffered from it for weeks. 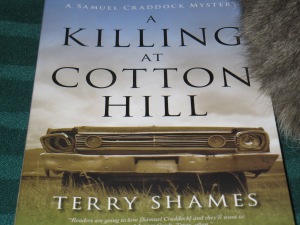 Several days ago, I posted part of a paragraph from Terry Shames’ first novel, A Killing at Cotton Hill, and illustrated it with a photograph of four white-faced Herefords. That was all.

That’s still all. I’m too close to the book. I wouldn’t dare try to review it now.

If I did, it would come out like this:

I love this book. It’s just so…There’s this wonderful sentence on the second page about hovering cows…That’s exactly what cows do…I can just see those cows…The person who wrote that sentence knows cows…And the dialogue…It’s just so…I just love it.

As soon as I saw it, I fell in love with that cow sentence.* I’ve read well past page two, but I can’t erase hovering cows from my mind. So I’ll say no more about A Killing at Cotton Hill.

I can report that yesterday evening I attended a reading at BookPeople celebrating the release of Terry Shames’ second book, and the second Samuel Craddock mystery, The Last Death of Jack Harbin.

Terry spoke, read an excerpt from the book, and finished up by taking questions from the audience. To prevent the possibility that this part of the post turn into babble, I’ll simply list some of the notes I jotted down:

Because of the hour, as well as my lack of detachment, this is as far as my not-quite-review will go. Suffice it to say that I enjoyed Terry’s reading, that I love A Killing at Cotton Hill,** and that The Last Death of Jack Harbin has gone to the top of my To Be Read list.

* The sentence isn’t really about cows. It’s about Samuel Craddock. But I am fond of white-faced Herefords, and the image Terry painted is so vivid, the cows overshadow the protagonist, at least in my mind.

** I forgot to take my camera to the reading, so I’ve illustrated with a photograph I took myself. The fur on the right of the book shouldn’t be there, but it was easier to just take the picture than to move the cat.

The crack in the sidewalk

So much for the Polar Vortex.

I head into the house for my hat and my cane and the keys to my truck. There’s not a thing wrong with me but a bum knee. Several months ago one of my heifers knocked me down accidentally and it spooked her so bad that she stepped on my leg. This happened in the pasture behind my house, where I keep twenty head of white-faced Herefords. It took me two hours to drag myself back to the house, and those damned cows hovered over me every inch of the way.

Kate has been nominated for a Shorty Award. You can nominate her here: http://shortyawards.com/Kateshrewsday?category=blogger&via=Blofelds_cats. It’s the right thing to do!

So there I was, scanning the airwaves on Twitter, picking up gossip and passing it on, as you do, when something happened which could have knocked me down with a feather.

Rover is a great favourite of mine. Assuming the simultaneous personae of a cat and an arch criminal, it is never long before followers start calling him ‘Boss’. We, his devotees, are Twitter henchmen. Twenchmen.

Rover is also Sarah. Sarah E Smith, the writer of The End of The Pier Affair. A book which combines my favourite locations and all the intrigue of a classic thriller,with a writer’s voice which draws you in immediately. Very English, extremely straightforward. And extremely more-ish.

You can find it here: and here.

And back to Shorty Awards: coveted amongst those who haunt cyberspace, they honour the very best of Social Media. And I have my… 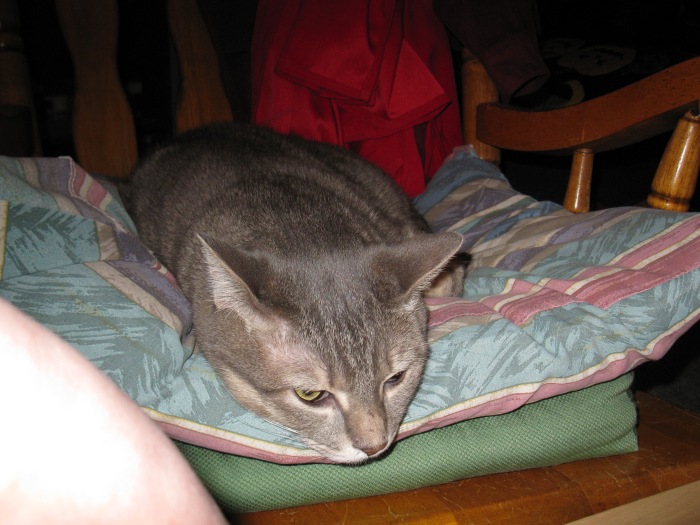 (Excelsior: a Latin word meaning loftier,
used in English as an interjection meaning Ever upward)
***
The shades of night were falling fast,
As through an Alpine village passed
A youth, who bore, ‘mid snow and ice,
A banner with the strange device,
Excelsior!
His brow was sad; his eye beneath,
Flashed like a falchion from its sheath,
And like a silver clarion rung
The accents of that unknown tongue,
Excelsior!
“Try not the Pass!” the old man said;
“Dark lowers the tempest overhead,
The roaring torrent is deep and wide!”
And loud that clarion voice replied,
Excelsior!
In happy homes he saw the light
Of household fires gleam warm and bright;
Above, the spectral glaciers shone,
And from his lips escaped a groan,
Excelsior!

“Oh stay,” the maiden said, “and rest
Thy weary head upon this breast! “
A tear stood in his bright blue eye,
But still he answered, with a sigh,
Excelsior!

***
A traveller, by the faithful hound,
Half-buried in the snow was found,
Still grasping in his hand of ice
That banner with the strange device,
Excelsior!
There in the twilight cold and gray,
Lifeless, but beautiful, he lay,
And from the sky, serene and far,
A voice fell like a falling star,
Excelsior!
~ Henry Wadsworth Longfellow
*** 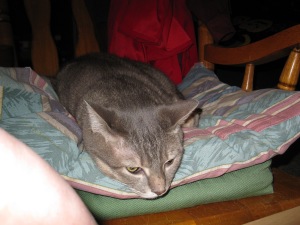 I should have posted a list of resolutions on January 1.

I should have said, In 2014, I will write a blog post every day and write one short story a month and submit it for publication and finish my novel and query agents and sign with one and impress a publisher so much that he will offer a 6-book contract and an enormous advance to publish the novel and will pay for a coast-to-coast book tour and I will graciously accept and while waiting for the book tour I will lose 800 pounds and finish my second novel and I will reduce clutter and I will run a marathon and I will read Moby Dick and all of Henry James’ novels and I will learn to cook and will put a tasty and nutritious dinner on the table every night and I will read a book a week and will practice the piano and take voice lessons and a conversational Spanish class and I will, by January 1, 2015, be such a paragon of perfection that I will never have to make another New Year’s resolution ever again.

But all this week, I’ve been in a beastly mood, just waiting for some unsuspecting person to do something nice so I could switch on my evil eye, and that feeling was compounded when Ernest ate six inches of ribbon that was hanging from David’s birthday balloon, which we didn’t think he could reach but were we ever wrong, and then I stayed up two nights watching him for symptoms before delivering him to the emergency clinic Wednesday night and at dawn Thursday picked him up and delivered him to his regular doctor, who this afternoon said so far he seemed okay and probably just needed to come home and move around and relax because he’d been sort of frozen up, not because he was scared but because he didn’t like the people there, from which description I gather he was in a beastly mood, too.

I want to recline in a vat of chocolate.

Anyway, to show I’m still a good person even though I don’t want to be, I’ll share this post from Totsymae: 9 Rules on How to Be Fabulous in 2014.

Nobody knows more about being fabulous than Totsymae, and I’m not talking everyday, garden variety fabulous. (To wit: Rule 1. Carry breath mints.)

I’ll be back in a day or two and maybe then I’ll have something more edifying to impart.