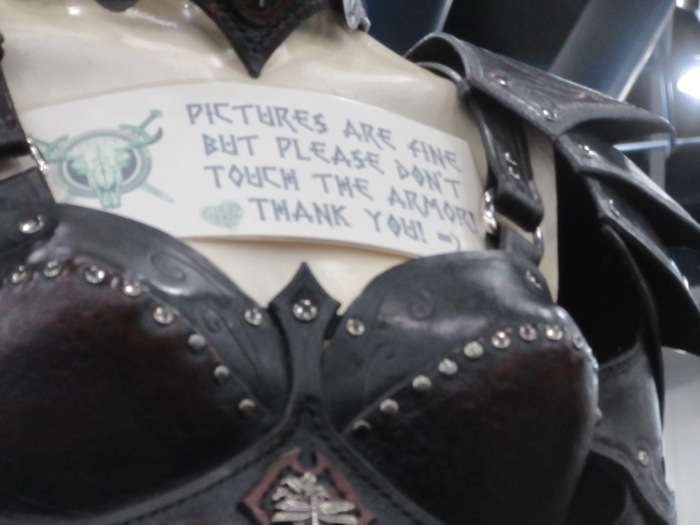 Nearby a poster read in part, “Cosplay is not consent.” If you want to touch a costume or pose with the player for a picture, ask first.

That cleared up something for me: You don’t have to ask to take a picture; you have to ask to pose with them for a picture. It’s smart to ask before taking any picture, because if you do, the subject will stop and strike a pose and smile, or, in the case of the mean, scary ones, snarl. But for just taking pictures of costumes in the crowd, no.

Concerning the use of photos of Comicpalooza attendees, the program states that attendees acknowledge and consent to being photographed, filmed, recorded, etc., and relinquish any reasonable expectation of privacy, and grant to Comicpalooza LLC an “irrevocable, royalty and attribution-free right to use, publish and otherwise exploit (and allow others to use and otherwise exploit) any photograph, motion picture, image, recording, or any other record of attendance during Comicpalooza, in whole or in part, in perpetuity throughout the universe, in all media and means, now known or hereafter developed or discovered, for any promotional or other commercial purpose.”

I’d say that covers about everything. An Oxford comma is absent, however, so the meaning might not be as clear as one would think. 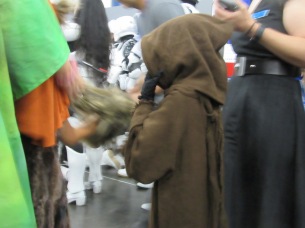 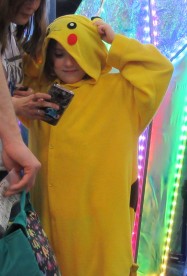 The big people, beasts, and thingies weren’t bad either. The Siberian husky was exquisite. 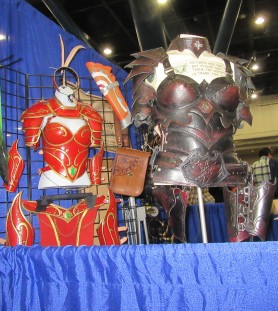 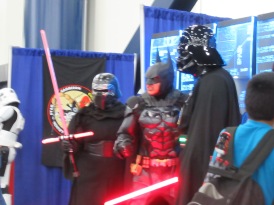 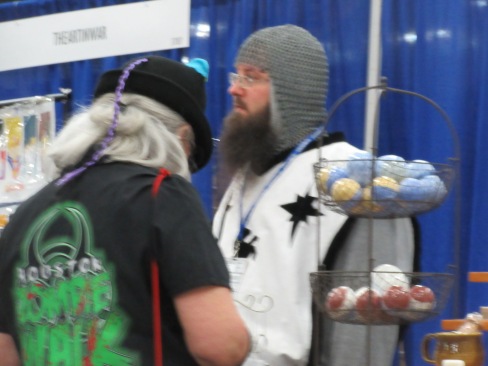 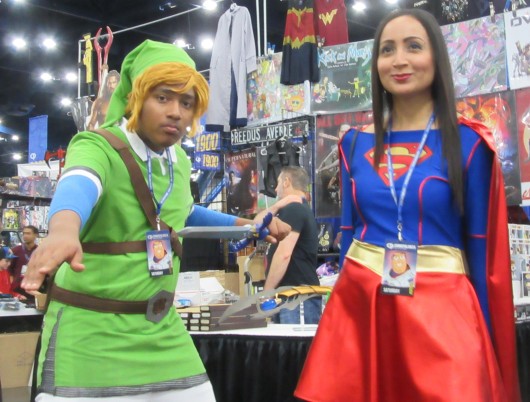 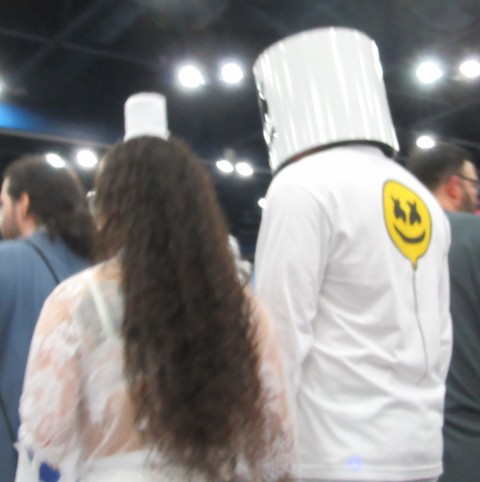 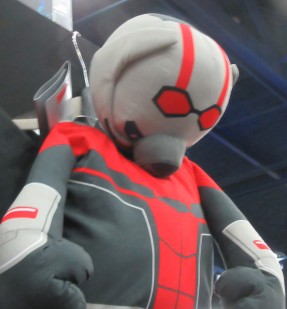 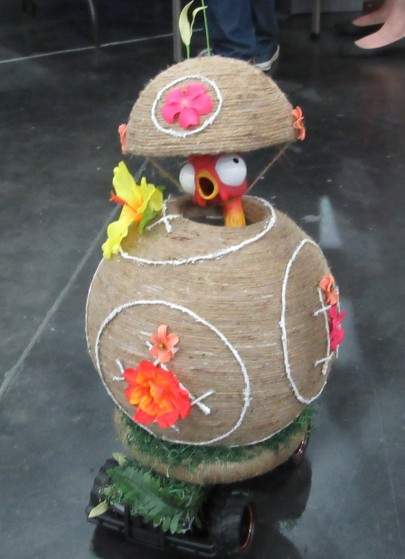 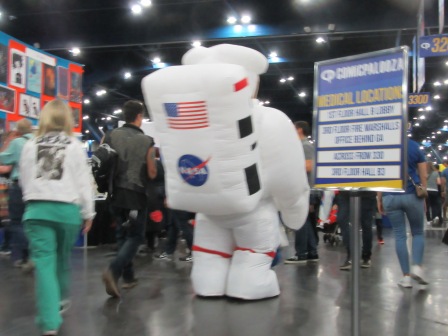 The spell check button is still missing from the WordPress toolbar. I’m beginning to think it was a figment of my imagination. I hope it comes back.

We’re in Houston for the screening of David’s short-short animated video, “Blood Bank.” 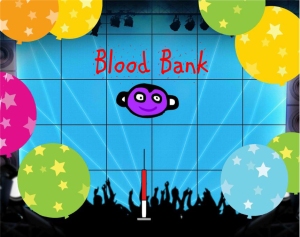 Before most trips, I stay up half the night doing laundry, but last night I stayed up cooking pot roast. The fixings had been around for several days–I’d told David to buy them and I would cook, but then life got in the way, some of it legitimate, like not having enough cooking oil–and the roast was almost to the cook-it-or-freeze-it point. I would have frozen it but the carrots, potatoes, and onion wouldn’t have frozen well, so I cooked and froze the result.

On the positive side, that roast was absolutely delicious. I know because I tried it before going to bed. A darned good roast. Even if I did forget to put in the potatoes until late and had to let it cook for an extra hour. Or more.

On the negative side, I am absolutely wiped out. I thought I was doing pretty well on the drive over until we stopped for gasoline and trail mix and I followed David into the men’s room. And couldn’t figure out why he was waving at me so vigorously. Sort of flailing like a windmill.

I used a men’s room in Paris with David as lookout–the other ladies’ restroom at the Musee D’Orsay was closed, and I got tired of standing in a line that stretched down the hallway–and nobody said boo. But Americans are more sensitive about those things than are the French.

Anyway, we got to the hotel around noon and had lunch and then I crashed. Then we had dinner and went to the screening. Then we went back to the restaurant because I wanted glass of wine.

I don’t drink–at least, that’s what my doctor said when I told him how much alcohol I imbibe per year–but I am so tired that I was afraid I wouldn’t sleep. I thought a medicinal glass of wine might knock me out.

So David ordered a Stella Artois for himself and ordered me a glass-and-a-half of Fleur de Mer. That’s nine ounces as opposed to a glass, which is six. I don’t like most wine, but rosé isn’t bad. A dessert wine I had at a Greek restaurant years ago was excellent, but I’ve forgotten what it was, so I’m stuck with rosé.

I would have had Dom Perignon if it hadn’t been $350 a bottle. I’ve been trying to remember if I’d ever been in a restaurant that had Dom Perignon on the menu. A restaurant we went to for Valentine’s Day a couple of years ago was serving some kind of steak for $150. I guess that’s the closest I’ve to Dom Perignon that I’ve come. David said it was a joke and no one would order steak for that price, but I pointed out you never know what some men will do to impress a girl they aren’t married to.

The glasses our beverages came in were just this side of mammoth. David took pictures. It was rather gauche of us to notice the glassware, but that’s just the kind of people we are. Furthermore, I’m from the country.

I’d been gauche once earlier in the evening: I asked (had David ask) for catsup. Fried catfish was on the buffet, but there were no condiments, and I’m sorry, but I grew up eating fried catfish on my grandfather’s front porch, and I know that with catfish, catsup is a necessity, even if Conrad Hilton doesn’t.

I used to think that staying at a Hilton meant I had to arrive looking like I’d made an effort, and I guess back in the ’50s that was true, but judging from the other guests wandering in from the parking garage, it ain’t true any more. So I’ve given up trying.

No, that’s not true. I do try. It’s just that nobody can tell it.

Anyway, we sat in the restaurant, and David drank his beer, and I drank my wine, and then I got into the wheelchair and David wheeled me to our room. I can walk just fine, except when I haven’t had enough food or enough sleep, or when someone is watching, and then I stagger, and I don’t go too far too fast under any circumstances, so on our film weekends, I get wheeled a lot.

My fault. I was forced to be sedentary for a while and liked it so much I just kept a-goin’. I’ve been walking more lately, though, and am doing quite well. If no one is looking. I’ve also registered at a gym.

Sad to say, however, I’ve come to enjoy being wheeled around. It was embarrassing at first, but I’ve gotten over that. Why walk when you can ride? Only at huge film festivals, though. Comicpalooza is huge.

Tomorrow we’ll wheel around the George R. Brown Convention Center, looking at people dressed like their favorite comic book characters. I think some will dress however they please. They’re all entertaining.  If I had my old Davy Crockett outfit, I would wear it, if it weren’t too small. I got it for my birthday a million years ago. The coonskin cap was especially nice. Somewhere there’s a snapshot of me wearing the outfit and holding my pet hen, Dickie.

There will be signs saying to ask permission before taking pictures of people in costume. I cannot for the life of me figure that one out. When anyone over the age of eighteen walks around in public around dressed up like Buzz Lightyear, he shouldn’t be surprised to see flashbulbs going off. Although I’m not sure we have flashbulbs any more.

Last year at lunch, we sat very near Thor. He told the man he was with that he needed lumbar support. I didn’t take his picture because I knew just how he felt. But the experience dampened the thrill of being only yards away from a Germanic god. Too much wielding of that hammer, I suppose.

But when I want a photo, I do ask. Rather, David asks. I’m shy. I wait till they walk away and and then take pictures of  their backs. I got one tonight. “Cat Lady Squad.”

Well. That’s my day. Thank you for asking.

The last time I posted, WordPress had a spell/word check on the toolbar. Tonight it seems to have disappeared. So if this post is riddled with errors, talk to WP about it. I proofed and proofed but that glass of wine is beginning to kick in and standard usage is falling by the wayside.

“Tor’s Fight With the Giants” by Marten Eskil Winge, public domain, via Wikipedia