The time is out of joint: O cursed spite,
That ever I was born to set it right!
~ William Shakespeare, Hamlet,
Act I. scene v.

Today I had a temper fit.

It had been building. In fact, it’s a wonder I didn’t lose my equanimity months ago.

The catalyst: I read a bit of non-faux journalism that suggests certain of the Powers That Be don’t think I’m—how shall I put it?—too big to fail.

And it didn’t set well. Hence the fit.

Let me be clear: It was not a major fit. No yelling, no screeching, no smashing of Waterford or Royal Doulton with Hand-painted Periwinkles.

Lobbing china at the hearth might be therapetic, as Barney Fife used to say, but it also ends with a lot of sweeping and mopping, and, if the S&M aren’t done properly, the tweezing of tiny participles* out of the soles of one’s feet.

But today venting seemed appropriate, so I engineered a venting fit. First, I cooled down. Active anger results in tangled thoughts and words. So I centered.

Then I emailed two of my elected representatives, stated my concern, and asked what they think about the issue. Next, I told them what I think and, in measured but no uncertain terms, advised them they’d better agree with me and act accordingly.

I do not expect them to agree or to act accordingly.

I do expect to receive, via email, replies so patronizingly and condescendingly irritating that I’ll be tempted to lob hand-painted periwinkles at the hearth.

But I shall not lob. I shall engineer another venting fit.

I do not expect to set everything right—after all, if Hamlet, who was a lot savvier than I, was unsuccessful at rooting out corruption in government, I doubt my paltry efforts would have much effect.

But I will use my time wisely. I will exercise my Constitutional right of Freedom of Speech.

I will email the Powers That Be.

And if the PTB find those emails patronizing, condescending, and irritating, I’ll have done what I set out to do.

*As my great-aunt Vara’s odd-job man used to say.

When you reread a classic you do not see more in the book than you did before;
you see more in you than was there before.  ~ Clifton Fadiman

The first years I studied Romeo and Juliet with my high school freshmen, when I was in my early twenties, I followed the Star-Cross’d Lovers school of literary criticism: Romeo and Juliet, two innocents, their eyes meeting across a crowded room, she teaches the torches to burn bright, he’s the god of her idolatry, he wants to be a glove upon her hand, she wants to cut him out in little stars—but the cruel world conspires to bring them down.

The way Juliet’s father tells her to thank him no thankings nor proud him no prouds but get to that church on Thursday and marry Paris or he’ll drag her thither on a hurdle—what kind of father says that to a thirteen-year-old girl? Parents don’t understand. They don’t listen.

The kids might be a little quick to act, and goodness knows Romeo should have waited to talk to Friar Laurence before buying that poison. But who can expect patience of teenagers in love? 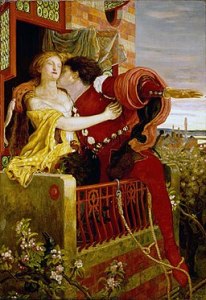 When I hit thirty, and had several years of teaching under my belt, I shifted to the What Can You Expect When Teenagers Behave Like Brats? philosophy: Romeo and Juliet, a couple of kids in a hurry. He doesn’t even bother to drop in on his family, just runs off to crash Capulet’s party, proposes to a girl before the first date, insists on a jumped-up wedding, then gets himself kicked out of the city, and he still hasn’t been home for dinner.

She mouths off to her father, tells him what she will and will not do, and he’s just told her what a nice husband he’s picked out for her. It’s no wonder he tells her to fettle her fine joints or he’ll drag her to church on a hurdle. I mean, if you were a parent and your daughter spoke to you in that tone of voice, would you pat her hand and ask what’s wrong, or would you remind her who’s boss here?

If Romeo had just gone home in the first place, like any decent boy would, instead of running off with his friends, this mess wouldn’t have occurred.

In fact, since Old Montague and Old Capulet had that very afternoon been sworn to keep the peace, they might have arranged a marriage between Romeo and Juliet—formed an alliance that way—and the whole of Verona would have lived happily ever after, and Montague would have been spared the expense of a gold Juliet statue. Paris might have been a little put out at being jilted, but he’d have gotten over it. Kids! They don’t think.

When I hit forty, however, I developed the dogma of the Meddlesome Priest. Friar Laurence has no business performing a secret marriage between two minors without parental consent. He says he wants to promote peace, but he isn’t a diplomat. His field is pharmacology.

Furthermore, when Juliet informs him she’s about to acquire an extra husband, why doesn’t he go right then to her father and tell the man she’s married? Capulet wouldn’t have been pleased, but he’d have gotten over it.

Instead, the Friar gives Juliet a sedative and stuffs her into a tomb with a passel of her relatives in varying stages of disrepair.

The man appears to mean well, but it’s also possible he intends to take credit for being the brains behind the peace accords.

Bunglesome or corrupt—the end is the same. With role models like this, are we surprised that children run amok?

Soon after the last epiphany, I ended my stint as a classroom teacher. I’ve wondered what would have happened if I’d continued studying Romeo and Juliet with students year after year.

Would I have had new insights? Developed new interpretations? Uncovered new layers of meaning?

How much more would I have shared with my students? Would I have continued to teach them respect and reverence? Would I have led them down the primrose path of dalliance and left them mired in levity?

How much more would I have seen in myself?

This post first appeared on Telling the Truth, Mainly on April 22, 2019, under the title “T Is for Time: #atozchallenge.”

Remarkable how a stolid, stick-like, straightforward

can, in a only a year, evolve into a curving, curling, growling dog’s name.***

***Nurse.
Doth not rosemary and Romeo begin both with a letter?

Romeo.
Ay, nurse; what of that? both with an R.

Nurse.
Ah, mocker! that’s the dog’s name. R is for the dog: no; I
know it begins with some other letter:–and she hath the
prettiest sententious of it, of you and rosemary, that it would
do you good to hear it.