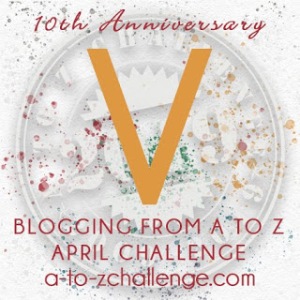 I thought I would write all twenty-six posts without them–I refrained from using them for Day C–but today I lack the vitality necessary to think of anything new. So on Day V I fall back on Cats.

As I recently posted, Ernest and I are having a disagreement over seating positions. My body and my massage therapist tell me I have to sit up straight and hold the laptop right in front of me. Ernest says he’s supposed to be right in front and the laptop can snuggle up to someone else.

I haven’t won, but, on the positive side, I’ve had to see the massage therapist only four times, and I now stand almost upright when I walk. In addition, I no longer get into the car like Audrey Hepburn. (That’s really more of a negative.)

Ernest spends more time than he used to sitting on David’s lap, he stares at me with an expression that implies he’s planning some outrage.

This evening we compromised. He curled up with his front on my leg, his head on the arm of the chair, and a narrow gap between. Because I feel guilty, I let him put his head on the keypad and, to keep him from sending emails, played Candy Crush. Then I moved my leg–it was numb–and he slid down, stretched out, and ended up squashed between me and the arm of the chair.

I took photos. They didn’t turn out–angle and proximity made it hard to get a good shot–but you might be able to get hint of our predicament. My predicament, really. As long as I rubbed his tummy, he didn’t care where he was. I don’t think he even noticed. 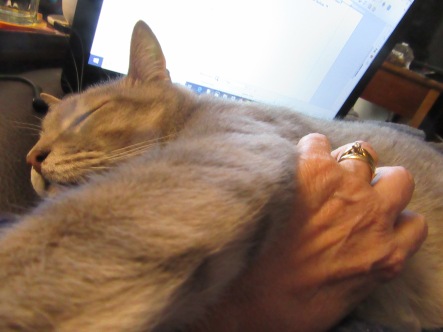 William occupied himself this afternoon with walking back and forth across the keyboard and me in pursuit of a bowl of granola bar crumbs that I kept moving back and forth so he couldn’t get to it. He’s so big and heavy (and determined) that when he decides to walk on the keyboard, he walks on it.

Nineteen pounds at his last checkup, down from twenty-three. I calculated the other day–I used to bowl with a ten-pound ball, and it wasn’t easy to lift. William is worth two bowling balls.

When he was a kitten, he would race me to my chair. Seeing me approach it, he would run across the room to get there first. It was both cute and annoying. I thought he wanted the chair. After a while, he stopped.

Lately he’s been doing it again, and I’ve realized he just wants to be petted. But he doesn’t want to give up the chair. I feel guilty for not snuggling with him nine years ago, so I push and pull him to one side of the chair and squeeze into the other–it’s a big chair, and we almost fit. Sometimes he stays wedged between me and the arm. Sometimes he struggles to crawl around to my lap.

If he jumps up when the computer is already in my lap, there’s no question of working. It’s all about him.

Well, that’s the update on William and Ernest. If I weren’t so sleepy, I would write something else–something brilliant, something scholarly and profound, cogent even, displaying my remarkable erudition–but on this Day V, the tale of two tabbies is all the farther I can go.

I learned all the farther from a co-worker who hailed from Minnesota. I love it. It’s in my personal lexicon to use on occasions such as this.

WordPress suggests I use yabbies instead of tabbies. Nah. Good word, but it doesn’t fit.

David and I are in Dallas for What the Fest 2 at the Pocket Sandwich Theatre, and we are officially chuffed. David’s “Invisible Men Invade Earth,” which was named Judges’ Pick in the 2017 WTF, was screened last night, first on the program–and will be shown again tonight.

What the Fest highlights films that don’t fit into any particular genre. (An understatement if there ever was one.)

Last night’s fan favorite was “Deletion,” the story of a psychiatrist who specializes in erasing patients’ memories. My favorite was “Toasted,” a look at what appliances, including a Scotch tape dispenser that handles tape about as well as I do, get up to when the master isn’t home.

Everyone in the audience received a raffle ticket for door prizes. If you let them stamp your forehead, you got an extra raffle ticket. Well, why not? David won a tote bag. Or maybe I did. I gave him my tickets to care for, and we don’t know whose number was called.

At the second intermission, girls* came around with a black light thingy and took pictures of our foreheads. Results are under Well, why not, above.

Pocket Sandwich Theatre is little and cute and specializes in melodrama, as you can tell from the carpet of popcorn on the floor.

What the Fest is my favorite of all the festivals we’ve been to, in part because little and cute also means informal–the principals say they’re a family, and they act like it. They have fun. So does the audience.

They also like David’s film. When they introduced it, they said they’d watched nine hours of submissions, and to keep themselves going throughout the arduous task, they periodically played “Invisible Men,” because it made them giggle. When we were leaving, a couple of the guys said they watch it a lot and also quote some of the lines (“Well, that sucks,” and “It is not a coincidence.”) One of the girls said she watches it with her mother.

In Austin, “Invisible Men, the story of two cats who save Earth by facing down a horde of space aliens,” and David’s other films are called weird.”** The folks in Dallas speak of “purity” and “a place of love.” In other words, it’s the kind of film you can take home to your mother, and that says a lot.

Once again, stars William and Ernest chose to stay home under the twice-a-day supervision of Charla, who feeds them, pets them, and gives William his insulin injection. They don’t like the carriers or the car, but they like Charla a lot. Charla emailed us that they’re playful.

We’re now using the wi-fi at the Denny’s next door to our hotel. The hotel’s wi-fi keeps slipping off the Internet and refuses to let me upload photos, but Denny’s is excellent.

In about four hours, we’ll head back to Pocket Sandwich Theatre to see “Invisible Men Invade Earth” and several new films. Last night, the audience started laughing before the first scene ended. I’m sure tonight’s viewers will be just as discerning.

*A purist would call them women, but where I come from, women that age are girls unless you’re trying to make a point.

Further note: Lone Star used to be the National Beer of Texas, and I guess it still is. I haven’t seen the commercial in a long time, but there’s a video on youtube extolling its virtues.  (See link above.) According to the expert, It’s got a perfect taste that’s hard to describe. 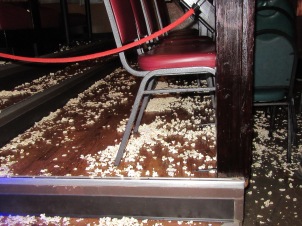 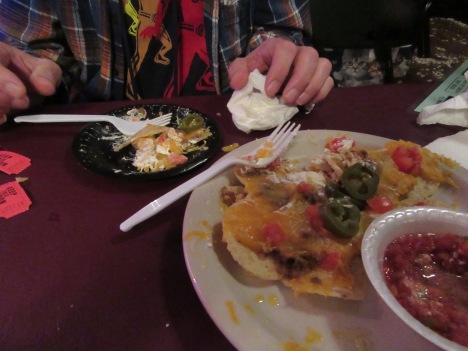