“So a Girl Walks into a Comedy Club” is one woman’s story of what should have been an entertaining evening at The Laugh Factory.

The dig has proved fruitless.

Weighed down by books, the bed sank into the pediment, where it was overgrown by carpet.

According to the Mayan calendar, it will land on the dining room table before the end of the year.

David’s stepmom and his niece arrive tomorrow at noon.

I have launched an archaeological expedition in search of the guest room bed. And floor.

So far I have discovered a pair of shorts I can almost wear, copies of a dozen books I need to read again, and an envelope of snapshots taken at the Barrow reunion in San Marcos ca. 1990. Plus assorted print materials.

Having spent the week engaged in selfish pursuits, I wanted to do one good deed before midnight–less than half an hour from now.

I met Thurber in fifth grade, when all students, K-12, were herded into

the auditorium to hear high school students practice for an upcoming Interscholastic League prose reading competition. Cullen Myers Dauchy read “The Night the Ghost Got In.”

By the end of the first page, I was in love.

Five years later, I had the pleasure of preparing Thurber’s “The Dog That Bit People” for the same competition. Although I never read it in contest–it fell under category C, and for three years in a row, the contest manager drew A or B–I loved the story of Muggs, who sank his teeth into everyone except Mrs. Thurber–and he went for her once–and in old age, walked through the house muttering like Hamlet following his father’s ghost.

I can’t share Thurber’s drawing of Muggs, so I’ve posted a photo from Wikipedia. This dog looks sweet, not grumpy, and Muggs was “a big, burly, choleric dog,” so for the full effect, you’ll have to imagine him with wearing a frown.

The Dog That Bit People, Part 1

The Dog That Bit People, Part 2

[Note: Read the following article at your own peril and with several grains of salt. ~ A Friend]

Here, in no particular order and, possibly, of no particular interest, are photos taken the weekend of the 2012 Roswell Cosmic-Con and Film Festival: uncaptioned, uncropped, just thrown out into cyberspace.

A few remarks to help in the deciphering process:

The first are from Friday night’s costume party at the Roswell Zoo. We expected to see space creatures but found zombies, executioners, and belly dancers as well.

The belly dancers danced with pythons. The dancer on the left has one wrapped around her arm. She was returning it to its basket.

That’s David in the tee-shirt with spacemen on the front.

The baby was cute, so I took her picture.

The space car was parked at the Holiday Inn. I don’t know whether it’s a permanent fixture or a visitor.

Billy (now Bill) Mumy was on the premises, but I didn’t see him.

The alien streetlights are a hoot. 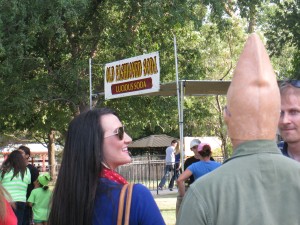 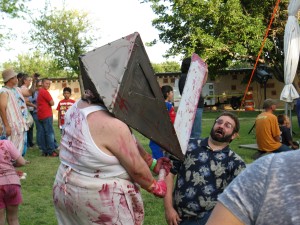 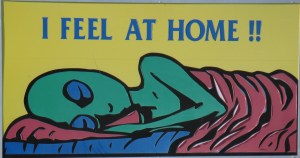