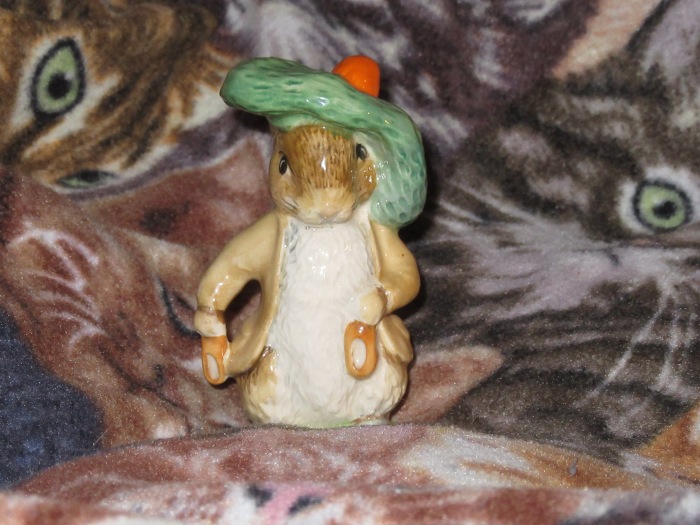 Packing up treasures, I came across Benjamin Bunny hiding in the corner of a china closet. I was surprised, because Benjamin Bunny doesn’t usually hide. 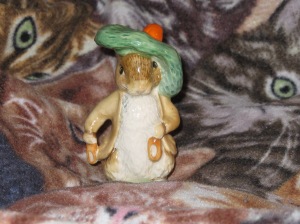 My mother gave me Benjamin for Christmas after she heard me extol his virtues. (I was nearly forty at the time.) Benjamin is brave and bold. While Peter Rabbit is still recovering from the cold he contracted from hiding in a water can in Mr. McGregor’s garden, his cousin Benjamin convinces him they should return to the garden to retrieve Peter’s clothes, which are now worn by Mr. McGregor’s scarecrow.

Peter’s clothes have shrunk because they were out in the rain overnight. Benjamin tries on the scarecrow’s tam-o’-shanter. It’s too big, but he wears it anyway.

Peter is nervous. He keeps hearing things and wants to go home, but Benjamin insists on filling Peter’s pocket handkerchief with onions to take to his Aunt (who doesn’t know they’ve gone back to the garden, of course). Then he eats some lettuce. On the way to the garden gate, they run into a cat lying in the sun.

They hide themselves and the onions under a basket. The cat strolls over and sniffs the basket. Then she jumps upon it and lies down. She stays for five hours.

What happens next I’ll leave to my dear readers to discover for themselves. Suffice it to say things get worse before they get better.

I’ve always loved Peter Rabbit, but there’s a special place in my heart for Benjamin Bunny. He’s a scamp. Knowing full well what happened to Peter in Mr. McGregor’s garden–losing his clothes and almost becoming the main ingredient in a rabbit pie–he convinces Peter to go back. And he risks not only his own neck, but the wrath of his Aunt and his father and his mother and . . .

I admire Benjamin Bunny. He’s what I am not. I don’t have the nerve to visit Mr. McGregor’s garden. Never had it.

And I don’t have the nerve to dress with style. That tam-o’-shanter is just to die for.

Beatrix Potter’s The Tale of Benjamin Bunny, complete with the original illustrations, appears at Project Gutenberg.

The backdrop in the photo above is one of several kitty blankets owned by the Davises. It’s not a good backdrop, but it was close at hand, and I didn’t want to search for something better.

A detailed–and interesting–article about copyright as it applies to The Tale of Peter Rabbit and other Beatrix Potter works appears at the LibraryLaw blog. The publisher, Frederick Warne & Co Ltd, has been to court several times arguing that it holds copyright to the books and that the illustrations are trademarked. Decisions have generally gone against Warne–but it’s complicated. I didn’t see a date on the article (although I might have just missed it); the latest comment reads 2009. Since then, the law might have changed.

Every scrap of content on the Internet should display a date in big font where it jumps out at readers. That’s my opinion, and I’m right.

I hesitated a long time before writing a book on woman. The subject is irritating, especially for women; and it is not new. Enough ink has flowed over the quarrel about feminism; it is now almost over: let’s not talk about it anymore.

Yet it is still being talked about. And the volumes of idiocies churned out over this past century do not seem to have clarified the problem. Besides, is there a problem? And what is it? Are there even women? True, the theory of the eternal feminine still has its followers; they whisper, “Even in Russia, women are still very much women”; but other well-informed people–and also at times those same ones–lament, “Woman is losing herself, woman is lost.” It is hard to know any longer if women still exist if they will always exist, if there should be women at all, what place they hold in this world, what place they should hold. “Where are the women?” asked a short-lived magazine recently. But first, what is a woman? “Tota mulier in utero: she is a womb,” some say. Yet speaking of certain women, the experts proclaim, “They are not women,” even though they have a uterus like the others. Everyone agrees there are females in the human species; today, as in the past, they make up about half of humanity; and yet we are told that “femininity is in jeopardy”; we are urged, “Be women, stay women, become women.” So not every female human being is necessarily a woman; she must take part in this mysterious and endangered reality known as femininity. Is femininity secreted by the ovaries? Is it enshrined in a Platonic heaven? Is a frilly petticoat enough to bring it down to earth? Although some women zealously strive to embody it, the model has never been patented. It is typically described in vague and shimmering terms borrowed from a clairvoyant’s vocabulary. . . .