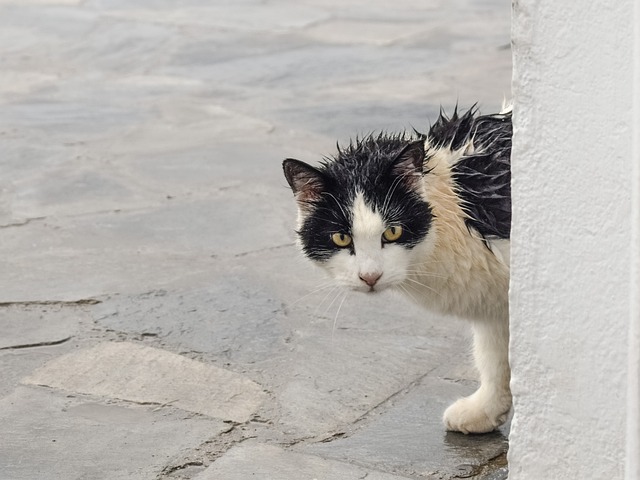 Some people scorn a cat and think it not an essential;
but the Clemens tribe are not of these.

That sort of interference in behalf of abused animals was a common thing with her [Twain’s mother] all her life; and her manner must have been without offense and her good intent transparent, for she always carried her point and also won the courtesy and often the friendly applause of the adversary. All the

race of dumb animals had a friend in her. By some subtle sign the homeless, hunted, bedraggled and disreputable cat recognized her at a glance as the born refuge and champion of his sort–and followed her home. His instinct was right, he was as welcome as the prodigal son. We had nineteen cats at one time, in 1845. And there wasn’t one in the lot that had any character, not one that had any merit, except the cheap and tawdry merit of being unfortunate. They were a vast burden to us all–including my mother–but they were out of luck and that was enough; they had to stay. However, better these than no pets at all; children must have pets and we were not allowed to have caged ones. An imprisoned creature was out of the question–my mother would not have a rat to be restrained of its liberty.

I’ve posted some of these quotations before. For the record, I like dogs, too. But at the moment, I’m sitting under a sleeping cat–and holding the laptop at a most uncomfortable angle–so cats are on my mind. So is Mark Twain. And I might as well get them out of my system.

A home without a cat — and a well-fed, well-petted and properly revered cat –may be a perfect home, perhaps, but how can it prove title?

He would call (the cats) to “come up” on the chair, and they would all jump up on the seat. He would tell them to “go to sleep,” and instantly the group were all fast asleep, remaining so until he called “Wide awake!” when in a twinkling up would go their ears and wide open their eyes.

~ Anonymous article titled “The Funniest Writer on Earth. Some Anecdotes about Mark Twain,” The Rambler, Dec. 24, 1898.

A cat is more intelligent than people believe, and can be taught any crime.

Sour Mash never cared for these things. She had many noble and engaging qualities, but at bottom she was not refined, and cared little or nothing for theology and the arts.

~ from the Autobiography of Mark Twain, Volume 2

“Other Christians is always worrying about other people’s opinions, but Sour Mash don’t give a damn.”

That cat will write her autograph all over your leg if you let her.”

~ from memoirs of Clemens’ secretary Mary Howden which were published in New York Herald, December 13, 1925

I simply can’t resist a cat, particularly a purring one. They are the cleanest, cunningest, and most intelligent things I know, outside of the girl you love, of course.

~ quoted in Abroad with Mark Twain and Eugene Field, Fisher

Twain owned up to 19 cats at one time, writes Livius Drusus for Mental Floss, “all of whom he loved and respected far beyond whatever he may have felt about people. His cats all bore fantastical titles, among them: Apollinaris, Beelzebub, Blatherskite, Buffalo Bill, Satan, Sin, Sour Mash, Tammany, Zoroaster, Soapy Sal and Pestilence, writes Drusus.

Throughout his life, when Twain travelled he would rent cats to take the place of his left-behind companions. “The most famous cat-renting episode occurred in Dublin, New Hampshire, in 1906,” writes Mack Hitch for New England Today. “Twain biographer Albert Bigelow Paine was there when the author rented three kittens for the summer. One he named Sackcloth. The other two were identical and went under the joint name of Ashes.” Why rent, you ask? He couldn’t travel with the cats, so he’d rent them and then leave behind money to help cover their care during all nine of their lives.

When a man loves cats, I am his friend and comrade, without further introduction.

The Great Cat: Cats in History, Art and Literature

Mark Twain and His Cats–10 Pictures