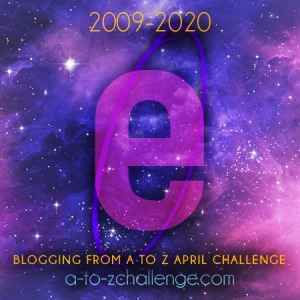 In “B Is for Bowser,” I announced that I would write about a mistake I’d made. In Part 1, I said I would get to the heart of the matter the next day. Then things (Day C and Day D) happened. I didn’t get to it the next day or the next.

On Day E, however, my egregious error will be revealed.

There’s an old narrative poem entitled “Curfew Must Not Ring Tonight,” about young Bessie, who saves her lover from a death sentence by climbing to the top of the bell tower and clinging to the bell’s clapper, preventing curfew from sounding when the rope is pulled.

Famous in its time, the poem is almost forgotten now. Its best-known modern use might be Katharine Hepburn’s recitation in the movie Desk Set.

Now to the Egregious Error:

Years ago, I ran across a parody of “Curfew Must Not Ring Tonight”—”Bowser Must Not Bark Tonight.”

It tells the story of Bessie, a young woman who fears the family dog will chase away her boyfriend when he comes courting. Papa says the dog must guard the melon patch and therefore cannot be tied. To ensure that John Henry gets all the way to the front door, Bessie takes matters into her own capable hands.

I don’t know why I thought about the poem—maybe I was running through mental files for a B-word and came up with Bowser—but I love the parody and thought it a likely topic for a post, so, before looking for “Curfew,” I googled, Bowser must not bark tonight.

Bowser shall not bark tonight. Nothing. Bowser will not . . .  Added poem and parody and other likely keywords. Nothing.

Or not exactly nothing. The very first hit, before all the methods of teaching a dog not to bark, was Exodus 11:7—”But among the Israelites not a dog will bark at any person or animal. Then you will know that the LORD makes a distinction between Egypt and Israel.” (New International Version)

Talk about dreams shattered and balloons burst. Google, access point to the universe, was a big, fat liar. Second only to the knothead who failed to enter “Bowser” into the database.

Coming up: one spoiled B-post. “Curfew” alone was nothing. Without the parody, why bother?

“Bowser Must Not Bark Tonight.”

“Towser Shall Be Tied Tonight.”

Had anyone been looking over my shoulder, I’d have blushed from shame. Because I was unobserved, I ate a Cadbury egg and determined to turn shame into a story.

Authorship of “Towser Shall Be Tied Tonight” is attributed to Anonymous, so, assuming it’s in the public domain, I include the entire poem. Blogger William Lee says, “As far as I know the writer is still unknown and if still living probably wishes to remain ‘Anon.’ but I would have loved to meet him or her because it is the kind of poetry I like.” I’d love to meet the author, too.

Towser Shall Be Tied Tonight

Slow the Kansas sun was setting,
O’er the wheat field far away,
Streaking all the air with cobwebs
At the close of one hot day;
And the last rays kissed the forehead
Of a man and maiden fair,
He with whiskers short and frowsy,
She with red and glistening hair,
He with shut jaws stern and silent;
She with lips all cold and white,
Struggling to keep back the murmur,
“Towser shall be tied tonight.”

“Papa,” slowly spoke the daughter,
“I am almost seventeen,
And I have a real true lover,
Though he’s rather young and green;
But he has a horse and buggy
And a cow and thirty hens, – –
Boys that start out poor, dear Papa,
Make the best of honest men,
But if Towser sees and bites him,
Fills his eyes with misty light,
He will never come again, Pa;
Towser must be tied tonight.”

“Daughter,” firmly spoke the farmer,
(Every word pierced her young heart
Like a carving knife through chicken
As it hunts the tender parts) – –
“I’ve a patch of early melons,
Two of them are ripe today;
“Towser must be loose to watch them
Or they’ll all be stole away.
I have hoed them late and early
In dim morn and evening light;
Now they’re grown I must not lose them;
Towser’ll not be tied tonight.”

Then the old man ambled forward,
Opened wide the kennel door,
Towser bounded forth to meet him
As he oft had done before.
And the farmer stooped and loosed him
From the dog-chain short and stout;
To himself he softly chuckled,
“Bessie’s feller must look out.”
But the maiden at the window
Saw the cruel teeth show white;
To herself she fiercely whispered, – –
“Towser must be tied tonight.”

Then the maiden’s brow grew thoughtful
And her breath came short and quick,
Till she spied the family clothesline,
And she whispered, “That’s the trick.”
From the kitchen door she glided
With a plate of meat and bread;
Towser wagged his tail in greeting,
Knowing well he would be fed.
On his well worn leather collar,
Tied she then the clothesline tight,
All the time her white lips saying:
Towser shall be tied tonight.”

To the melon patch she took him
As he bounded at her side
To an apple tree she led him.
And the knot she firmly tied.
“There’s Pa’s melons, you must guard them
All day long you stay right here
When John Henry comes to see me
He’ll be safe and have no fear”
And her steps were light and happy
As she thought of joy so bright
When her lover would be coming
Towser would be tied tonight

Up the path the young man sauntered
With his eyes and cheeks aglow;
For he loved the red-haired maiden
And he meant to tell her so.
But her little brother, William
In a fit of boyish glee,
Had untied the slender clothesline,
From the harvest apple tree.
Then old Towser heard the footsteps,
Raised his bristles, fixed for fight, – –
“Bark away,” the maiden whispers;
“Towser, you are tied tonight.”

Then old Towser bounded forward,
Passed the open kitchen door;
Bessie screamed and quickly followed,
But John Henry’d gone before.
Down the path he sped most quickly,
For old Towser set the pace;
And the maiden close behind them
Showed them she was in the race.
There’s the clothesline, can she get it?
And her eyes grew big and bright;
Then she sprung and grasp it firmly;
“Towser must be tied tonight.”

Often times a little minute
Forms the destiny of men.
You can change the fate of nations
By the stroke of one small pen.
Towser made one last long effort,
Caught John Henry by the pants,
But John Henry kept on running
For he thought that his last chance.
But the maiden held on firmly,
And the rope was drawn up tight,
All the time her white lips saying
“Towser must be tied tonight”

Then the father heard the racket;
With long strides he soon is there,
Where John Henry and the maiden,
Crouching, for the worst prepare.
At his feet John tells his story,
Shows his clothing soiled and torn;
And his face so sad and pleading,
Yet so white and scared and worn,
Touched the old man’s heart with pity,
Filled his eyes with misty light.
“Take her, boy, and make her happy, – –
Towser shall be tied tonight.”

The Blogging from A to Z Challenge master list appears here. It’s up to 510 blogs. Something for everyone.

Image by Pexels from Pixabay