Day H. I’ve worked my way from “Herman” (a kitchen monster) through “Here’s the latest from SIP” (bo-ring) to “Husband,” which I should have thought of in the first place.

After careers focusing on criminal codes and tax codes, David Davis creates. His Alien Resort cartoon has appeared in newspapers in the United States, Great Britain, and Australia.

Now the developing story of Alien Resort appears on his website, Alien Resort: A Website That Is Actually a Story. 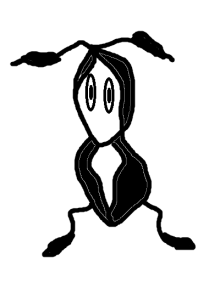 A little background on that: Coy crash landed his spaceship on a Pacific island and has since been joined by other ETs—Plucky, Deadpan, and Lmao—who help him write comics. A group of earthlings, the Beacons of Night and their leader, Rash Lambert, oppose the efforts of Coy and his friends (“We stand for a united earth. If you were born here, you’re one of us. When Alien Resort makes comics, they’re stealing our jobs.”)

Before becoming a cartoonist, David Davis produced, directed, wrote, and sometimes acted in sci-fi videos. His work has appeared at the 2017 Fort Worth Indie Film Showcase; the 2017 Dallas Medianale; the 2012 Boomtown Film and Music Festival in Beaumont, Texas, and the 2012 CosmiCon and Sci-Fi Film Festival in Roswell, New Mexico, as well as other venues.

After Reverse Effects was screened at the 2015 Fantastic Fest (Austin), Andrew Whalen of Playerone.com wrote that the film “is almost like a living comic strip, but undeniably vigorous and fascinating.” He also labeled David “eccentric.” The jury is still out on the latter.

Last Saturday, his first animated video, Blood Bank, was screened at the Dallas Alt Fiction film festival—online, of course, in the comfort of everyone’s living room.

In all his creative endeavors, David is self-taught. He also excels at  producing award-winners on a shoestring. Where some directors spend millions, David reaches into a drawer, pulls out a vegetable steamer, applies a few special effects, and—voila! a spaceship rises from the ground and makes for Venus. Or somewhere in the vicinity.

See what you think:

Here’s a link to Blood Bank.

And one to Time Capsule.

All of David’s videos can be viewed on his Youtube channel, here.

The Blogging from A to Z Challenge 2020 master list is found here.